Green Infrastructure in the Wake of Hurricane Ida: Part I

“Green Infrastructure” (or, alternately, “Blue Green Infrastructure”) is a term that was reportedly first used in a report to the Governor of Florida in 1994. It is now increasingly common in general conversation, especially in regard to coping with the accelerating effects of climate change and denotes a growing field that has been evolving to meet a widening range of challenges. At the present time it can be said to really encompass three interrelated areas that will be discussed below. This report will take New York City as an example, both to see what is currently being done here and to better understand this growth of Green Infrastructure, or GI. 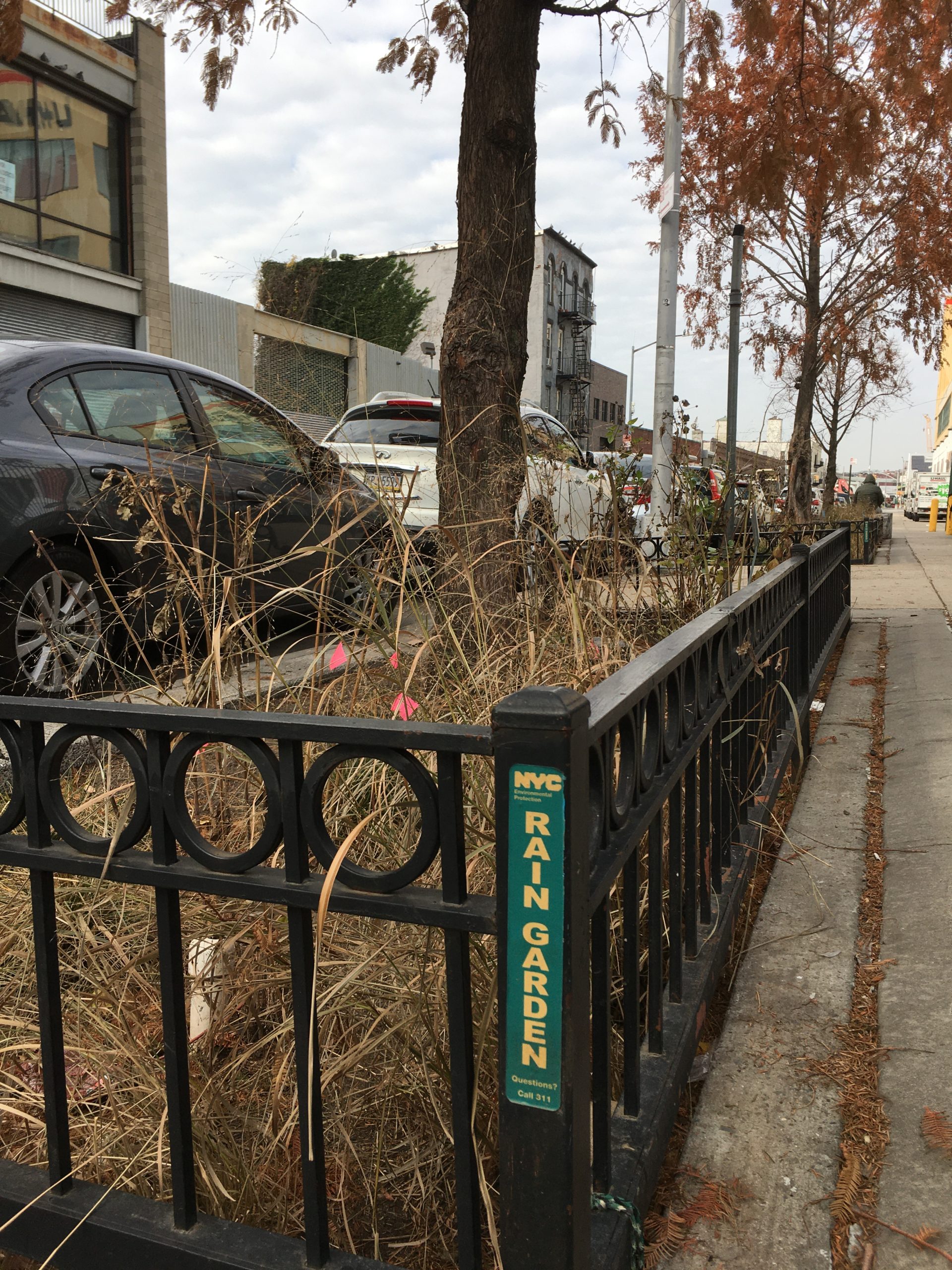 An experimental bioswale in Gowanus

In the New York context, interest in GI grew over the years as the City tried to resolve the problem of Combined Sewer Overflow (CSO) resulting from the fact that most of the sewer systems in the five boroughs carry both human-generated wastewater and stormwater runoff, and when rainfall is heavy the flow overwhelms the system’s capacity to properly treat it before discharging it into the surrounding waterways. Following passage of the federal Clean Water Act in 1972, the City faced a series of lawsuits due to the resulting contamination of the water in which this urban archipelago sits. Because it is prohibitively expensive to address inadequate wastewater capacity, especially surge capacity for rainstorms, through traditional “Grey Infrastructure” (i.e., concrete), interest grew in Green Infrastructure as an innovative, and hopefully cost-effective, alternative to fulfill this need.

Initially, then, GI referred to measures to slow and reduce the amount of rainwater entering the sewer system and, consequently, improve water quality in the surrounding environment. This could be termed “outflow management”.

This emphasis shifted after Superstorm Sandy in October 2012, when parts of the city and surrounding communities were inundated by storm surge from the Atlantic Ocean, which also fed surges in Jamaica Bay, New York Harbor, and other bodies of water. Suddenly, the emphasis shifted to protecting vulnerable areas along the coast from future surge events and “Green Infrastructure” was also used to describe many of these strategies. Different from the original version, this could be termed “inflow management”.

Most recently, New York was hit by Hurricane Ida on September 1st, 2021, which dumped over 3 inches of rain on parts of the city in just one hour and 6 to 7 inches over roughly one day, killing 13 people. Of these, 11 people drowned in their basement apartments in Queens that filled with water in a matter of minutes.

This latest incident has shifted the focus of GI again to include Cloudburst events, a term that has been around for a few years in professional circles but heretofore was not a part of the general discussion about GI in New York. Framed in the terms mentioned above, Cloudburst GI is a form of outflow management, but one that is more concerned with protecting human activity, so can be said to lie between the earlier versions of GI due to its being outflow management but primarily concerned with protecting people from nature. It can consist of either beefed-up capacity to retain and slowly release stormwater or to divert and expel it more rapidly and with less damage.

We have previously reported on inflow management through the various coastal resiliency projects going on around the city. Rebuild by Design and other sources have been reporting more recent updates on these.

In this set of reports, we would like to present some examples of outflow management that have been executed over the past few years. Along with this, it is also important to consider how existing projects performed during Ida and how this has affected evaluations by the City and other organizations of what now needs to be done, both to potentially modify existing plans or perhaps create further new initiatives.

There are a number of entities involved in developing outflow GI around New York City. The City itself is the largest, primarily through the Department of Environmental Protection (DEP), but very much including the Department of Parks and Recreation (DPR) and Department of Transportation (DOT), and several other agencies as well. Among nonprofits and other groups, this report will also focus on the Gowanus Canal Conservancy (GCC) as a representative of the kinds of innovative efforts being undertaken in partnership with these City agencies. 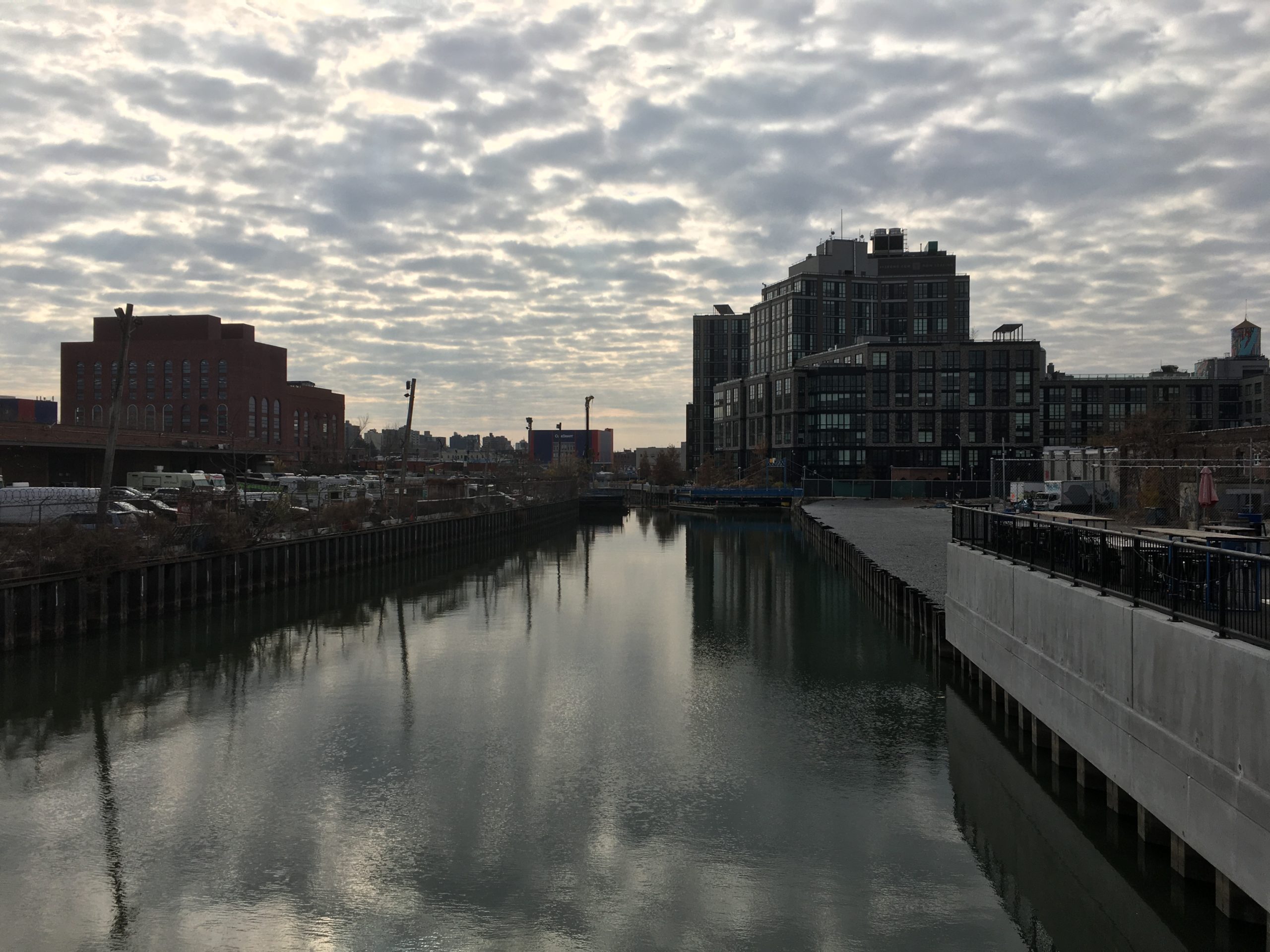 GCC was created in 2006 to advocate for the creation and care of ecologically sustainable parks and public spaces in the Gowanus lowlands, and it also works to empower a community of volunteers to help care for those. They are the environmental steward for the area, leading grassroots volunteer projects, educating students on environmental issues, and working with a range of agencies, elected officials, and the community to further their mission. Green Infrastructure has been shown to provide not only water quality and flood control benefits, but also helps alleviate heat island problems, improve public health, and even make neighborhoods safer (see, for example https://www.urbanhealthlab.org/).

Talking with Amy Motzny, Watershed Senior Planner with the Gowanus Canal Conservancy, post-Ida, she said that for outflow management GCC’s focus is on water quality rather than flood control, but their activities are based on 10-year-old data. At the moment, there is no funding to address flooding, although DEP is preparing to launch a set of Cloudburst studies and GCC is negotiating to be included in this.

GCC has been deeply involved in the discussions surrounding rezoning of the area (which has just been approved by the City), as it has become a major focus of housing and business development in recent years. GCC’s objective is to integrate ecologically sustainable parks and greenspaces into planned development to both provide better quality of life for residents and address this evolving range of issues concerning the environment and climate change through Green Infrastructure solutions. Advocacy is one part of this, while ‘hands in the dirt’ efforts are another.

GCC established the Gowanus Tree Network in 2018 , training Tree Ambassadors to help care for tree beds across the 16 blocks in their Gowanus Tree Management Area. They expanded this program in 2019 to include measuring the stormwater performance of existing tree beds in the neighborhood. GCC previously worked with Drexel University to monitor the stormwater performance of right-of-way rain gardens in the neighborhood as part of the 6th Street Green Corridor. In 2019, they then partnered with Temboo to test the effectiveness of tree plantings for stormwater management with a simplified cloud-based monitoring service using instruments created by National Control Devices, which are smaller and cheaper than the Drexel devices. Temboo also designed an easy-to-use interface for GTN volunteers to use. Eventually, beyond simply understanding how differently constituted bioswales perform, they also gained unintended insight into understanding the importance of stewardship in maintaining that performance (which is a critical issue with GI).

Amy and her colleagues have worked to test a wide variety of bioswale concepts, incorporating different plants, soil, and physical configurations. Early efforts ran into many difficulties, such as contractors digging up a tree bed and destroying the monitoring equipment and other devices being stolen, and cost remains a major consideration in monitoring. They have, nonetheless, been able to gather valuable information on optimal bioswale design and issues of concern. 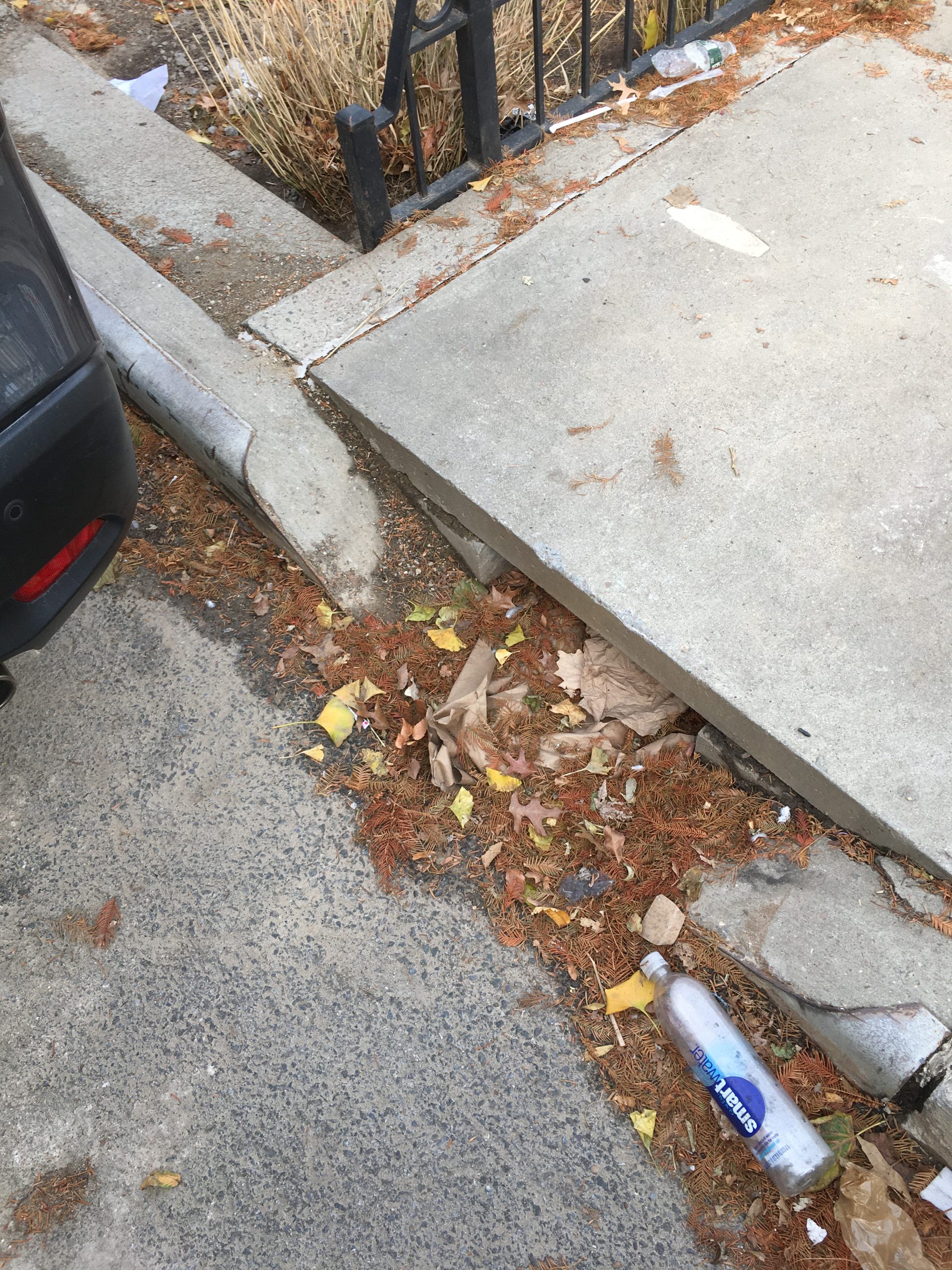 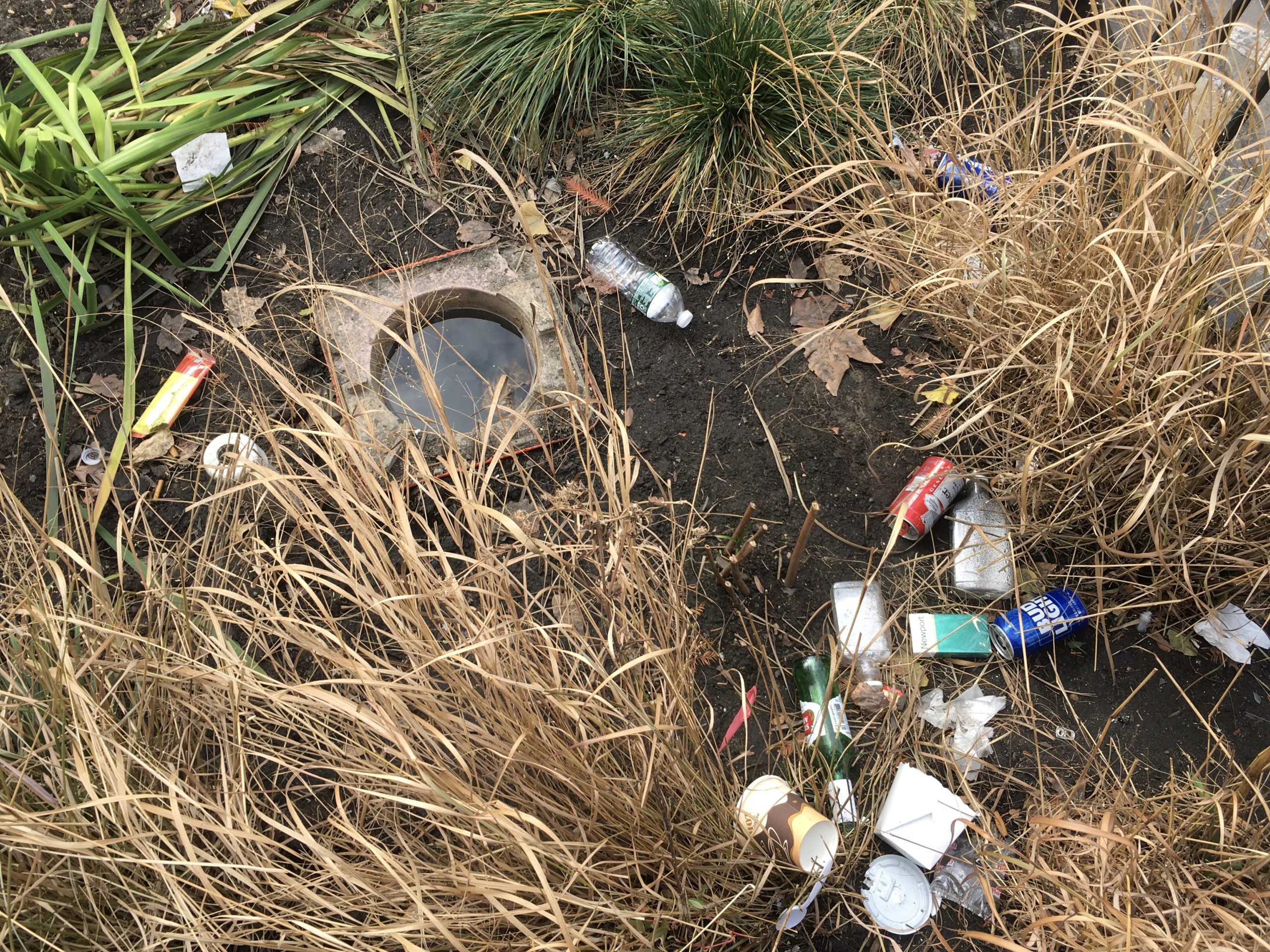 Trash is a constant problem.

Probably the biggest factor for Green Infrastructure is maintenance. While GI tends to have a lower initial cost compared to most Grey Infrastructure, its continued performance depends on making sure the plants are healthy, trash does not accumulate, and it is not compromised in any way. Bioswales are particularly high maintenance, and current DEP practice includes contractual arrangements requiring that contractors be responsible for the first three years of maintenance. Further, with around 11,000 bioswales around the city already, maintenance by the City alone is clearly not feasible, even if a multi-agency undertaking. However, there is a general hesitancy to let volunteers take care of these assets. This may partly stem from the fact DEP has never normally worked with citizens in the way DPR and other agencies have. GCC is working with other organizations to improve bioswale designs and maintenance practices, and to develop better technology that can help direct resources (especially human resources) where they need to go efficiently. A system of trained volunteers acting on data from remote sensing to know where issues are arising is essential to any sustained use of GI to address issues of concern, whether these be outflow management, public health and quality of life, safety, or others.

Ultimately, Green Infrastructure will almost certainly require substantial collaboration between government agencies and nonprofit and community groups in order to maintain it. With various pilot programs underway involving all these stakeholders, improvements in best practices for design and maintenance should continue to evolve.