New York City Emergency Management (NYCEM) has issued a report on its Post-Disaster Housing Prototype Program, carried out with the New York City Department of Design and Construction (DDC) with support from the Federal Emergency Management Agency (FEMA). Titled “Close to Home: An Urban Model for Post-Disaster Housing”, the report outlines the roots of the project in the emptying out of many areas in New Orleans after Hurricane Katrina when sufficient housing could not be provided in or near the city, through the “What If New York City…?” competition that brought together a number of ideas for mass-produced, readily-deployable urban housing options, to the design and execution of the urban post-disaster housing prototype (UPDHP) itself, which was assembled on a lot next to NYCEM in 2014.

The “What If NYC…?” competition was launched in 2007 as a joint initiative of NYCEM, DDC, the Rockefeller Foundation, and Architecture for Humanity. Contestants were asked to design housing solutions for a fictional neighborhood called Prospect Shore following a devastating hurricane. Ten winners were announced in January 2008 and their final designs were refined and unveiled that June.

According to Ms. Cynthia Barton, NYCEM’s Senior Housing Recovery Program Manager overseeing the UPDHP project until recently, “What If NYC…?” was held in part simply to raise awareness of and interest in the need to find ways to provide emergency shelter in a densely-packed environment like New York City. A number of useful ideas came out of the competition, and one of these was a system based on modified shipping containers that became the basis for New York’s prototype.

Another big influence was Shigeru Ban’s modular housing project for the town of Onagawa, in Miyagi Prefecture, Japan, built following the March 11, 2011, earthquake and tsunami that devastated the Tohoku Region. Ban’s design utilized two and three story blocks of modified shipping containers to create an open, pleasant community of thoughtfully designed living spaces in a very compact area. Their main drawback has proven to be the fact they were designed as truly short-term structures, and after about five years they began exhibiting problems with wear and aging. 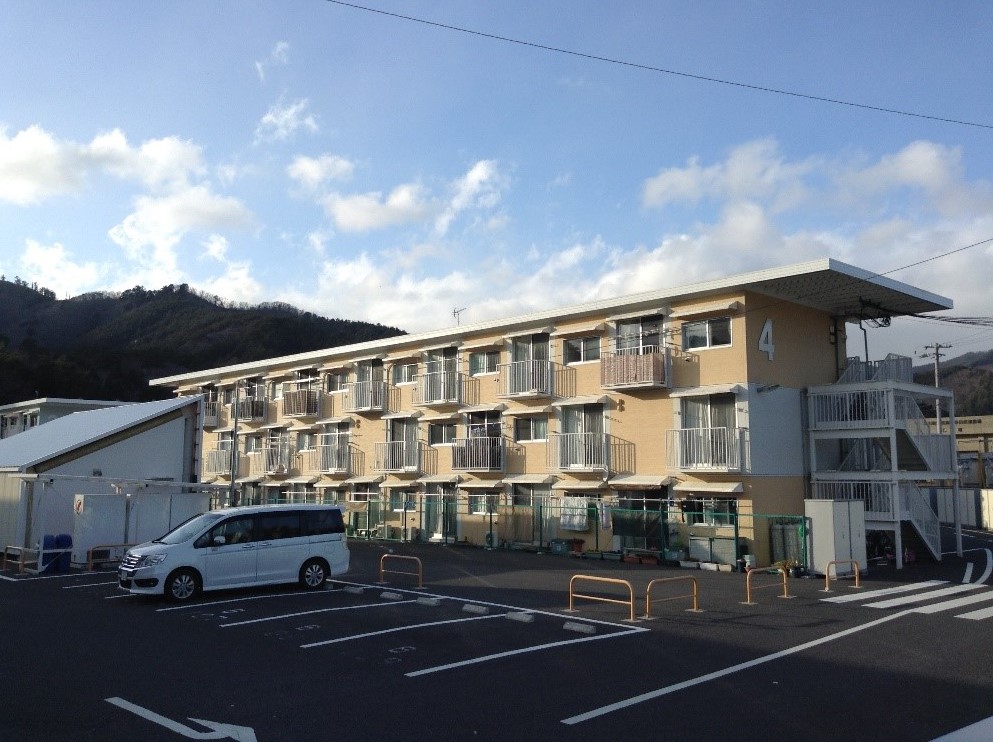 New York City’s prototype, on the other hand, has a projected lifespan of 50 years, allowing for reuse and for the fact that what is planned as “temporary” all too often ends up being used far beyond original expectations.

Unlike lower density residential areas, where trailers or individual prefab units can be sited fairly easily, undertaking any sort of work in New York City involves difficult considerations of available space, conflicting needs, and overlapping regulatory jurisdictions. Even though the UPDHP demonstration project was very small-scale, it required the input of 17 agencies to deal with all the issues that arose. Even if many elements of a project like this such as design that meets code, sites that meet zoning requirements, and community approval were pre-arranged, other matters such as site preparation, logistics, utility connections, and Certificates of Occupancy would still require massive amounts of work. And at this moment, apparently none of these have been addressed.

Furthermore, the report cites three primary questions that entail complex policy decisions: 1) Who will pay for urban, multistory, multifamily, deployable housing? 2) What are the eligibility requirements for living in such housing? 3) When is interim housing likely to become permanent, and how might that change recovery planning? (p.49) One practical implication of the last question, which came up in discussion with Ms. Barton, is, who would be in charge of this housing? If seen as short-term, post-disaster housing, the units would probably be a FEMA project. But if it were considered a long-term (permanent) project, then it would come under the jurisdiction of the Department of Housing and Urban Development (HUD). Similarly, in NYC, jurisdiction would belong to either NYCEM or the Department of Housing Preservation and Development (HPD).

So although the project has helped produce a viable solution for housing people displaced by a major natural disaster, at least in the short-term, it has also left many questions that remain unanswered and is, in the end, only one step in an ongoing planning and preparation process.

Another question, touched upon in the report as well, concerns the number of housing units that can realistically be produced by the modular building industry in a short amount of time. The competition asked for 100,000 units within 108 weeks, but reports that responses from vendors were significantly below this rate (p. 31).

This problem, however, could also present an opportunity. In an effort to address a shortage of skilled workers and extremely high construction costs, a number of private sector modular housing projects have been carried out over the past few years in New York City, ranging from the 6 story, 5 unit luxury condo building at 193 Henry Street on the Lower East Side to the 32 story, 363 apartment tower at 461 Dean Street in Brooklyn. The 9 story Carmel Place building in Kips Bay (in Manhattan) is another experimental design, with 55 micro-units (at approximately 300 square feet) and communal spaces, offering more affordability through combining modular construction and smaller floor plans.

The City of New York has also gotten into the game, first through (finally) adopting modular construction for the remaining projects in its long-troubled Build It Back (BIB) program and, most recently, in the Request For Proposals issued by HPD for a 50,000 square foot affordable housing project containing from 62 to 100 units to be built using modular construction in East New York.

Cynthia Barton reports there was discussion between the UPDHP people and the BIB modular construction team (the “Mod Squad”), but it is unclear whether the City has any overall strategy for coordinating modular construction to address either post-disaster or affordable housing needs. Clearly, however, supporting the modular construction industry through expanding use of these units for affordable (and even mid-price and luxury) housing would help ensure the base production capacity is there to ramp up when emergency shelter is required somewhere. 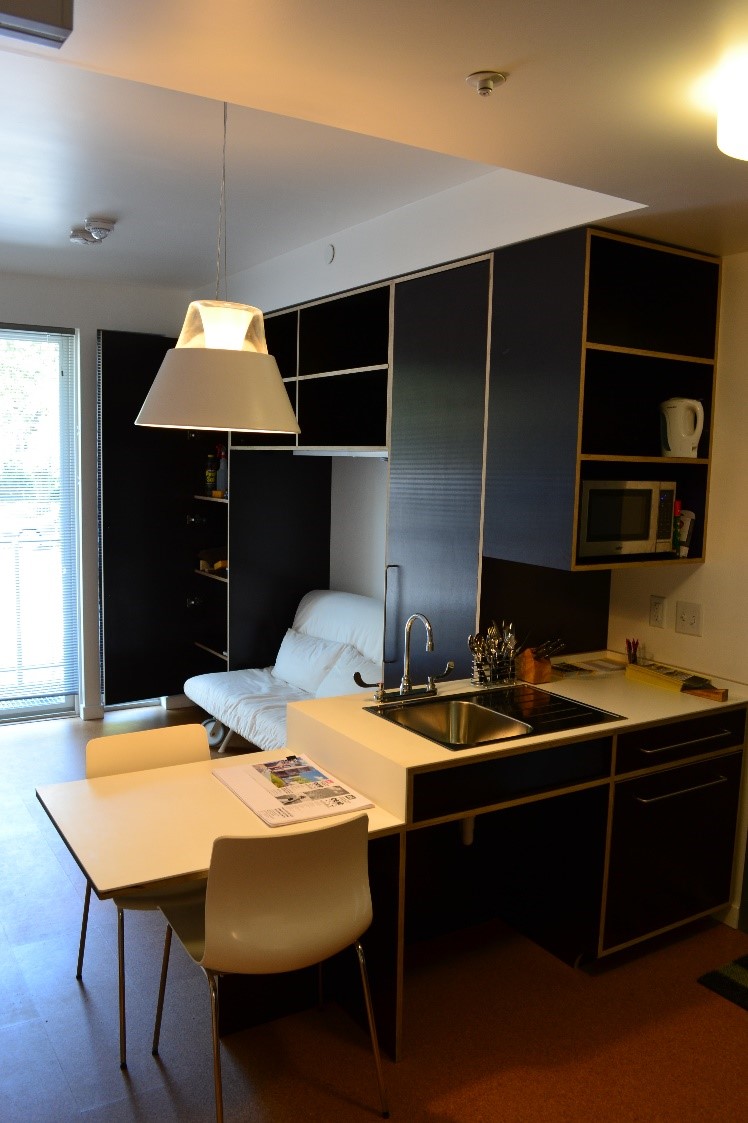 As noted above, one important issue still to be addressed is where temporary units would be placed. Locations for temporary housing units should, like all other aspects of disaster response, be mapped out beforehand in collaboration with local communities. As laid out in FEMA’s “Pre-Disaster Recovery Planning Guide for Local Governments” (issued in February 2017), “The ability of a community to successfully manage the recovery process begins with its efforts in pre-disaster preparedness, mitigation, and recovery capacity building.” A flexible, comprehensive framework for post-disaster housing options is an important part of this. However, it is unclear whether the City has engaged in any discussion with its communities (either its many distinct neighborhoods or its 59 more broadly based official community boards).

At least now, with the findings of its prototype project in hand and a better idea of what needs to be done, the City is on a firmer footing to begin the necessary conversations it will need to have in order to be better prepared for the next time disaster strikes.