The Governor of Tokyo, Mr. Inose, announced on November 15th in a regular news conference that Tokyo would expand its participation in the JET Program and hire about 100 ALTs, or Assistant Language Teachers, in 2014. Tokyo has been selected as the host city for the Olympic and Paralympic Games in 2020 and is taking this opportunity to move forward with sweeping reform of English education along with promoting further internalization of its overall curriculum. Only five JET participants were employed by Tokyo in 2013, but the Tokyo Metropolitan Government will hire about 100 participants in 2014 and 100 more in 2015. Tokyo expects that high school students will have opportunities to communicate with native English speakers on a daily basis not only in classes but also through a wide variety of school events, and these experiences will help improve practical skills for speaking and listening. In addition to English education, Tokyo hopes that JET Program participants will play a role in international exchange and that high school students who interact with JET participants will volunteer in the 2020 Tokyo Olympics. In April 2013, when Governor Inose visited Yankee Stadium in New York, he met an American interpreter, and the Governor asked him where he studied Japanese. It turns out he was a past JET participant and worked at Soma High School in Fukushima. Mr. Inose also met with many members of the JETAA New York chapter and learned that they are working very hard as a bridge between Japan and the U.S. by introducing Japanese culture to New Yorkers and being involved in fund raising for Tohoku rebuilding. It is the Governor’s recognition of these kinds of efforts by JET participants that has led to the expansion of the JET Program in Tokyo. Along with Governor Inose, many Japanese governors have visited the US this year, and each of these governors has interacted with members of JETAANY and other chapters across the country, reaffirming the importance of the JET Program and the significant role it plays as a bridge between Japan and the United States. So many alumni love Japan and want to continue to have a relationship with Japan. Japan Local Government Center hopes that, following Tokyo’s lead, many more prefectures and cities in Japan will recognize anew the significance of the JET Program and the value of its alumni network, and that they will also decide to utilize these resources more fully. 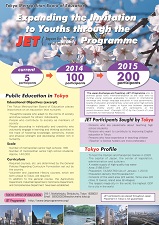 Please click to refer to this flyer: Expanding the Invitation to Youths through the JET Programme (pdf)   Rie Imazeki Director / Representative of Tokyo Metropolitan Government