Japan Local Government Center, in partnership with the Japan Center for International Exchange (JCIE), was proud to host a public seminar on Wednesday evening, November 6th, with this year’s winners of the Tiffany Foundation Award for the Preservation of Japanese Traditional Arts and Culture in Contemporary Society. This year’s awards were given to the Association for the Promotion of Ipponsugi Street, in Nanao City, Ishikawa Prefecture, and to ENVISI, an arts organization in Miyagi Prefecture.

The Ipponsugi Street group was recognized for their efforts to revive and promote the traditional local custom of giving elaborate “hanayome noren” (ceremonial door curtains given to brides) and using these noren as the centerpiece of local revitalization activities. Hanayome noren are traditionally hung across the entrance to the room containing the groom’s family altar as part of the ceremony where a bride would visit to pay respects to his ancestors as the first step in the wedding ceremony. They are designed with the crest of the bride’s family and other decorative motifs, and are a way for her family to show how much she means to them. Normally, after the ceremony the noren were tucked away, never to be used again.

This is a custom peculiar to the Noto Peninsula region on the Japan Sea coast in Ishikawa Prefecture, with its beginnings sometime around the end of the Tokugawa Shogunate and the beginning of the Meiji Era, and is unusual even within Japan.
Faced with the common challenges facing almost all rural areas of an aging and shrinking population, Nanao City residents decided to embrace the tradition of hanayome noren in an effort to both preserve the tradition and give residents a way to enliven their community and attract visitors. A festival is now held every year where houses display their hanayome noren and talk about them with visitors. They are also planning to construct a visitors’ center to display noren and provide information on them beyond the roughly two weeks in the spring when the festival is now held. 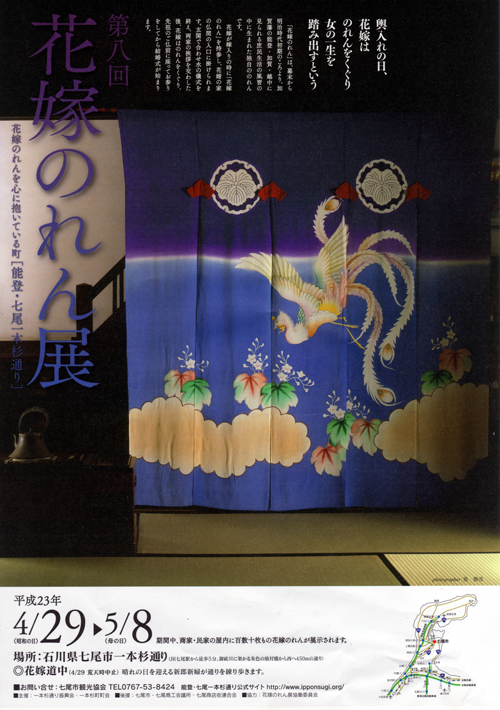 ENVISI was represented by Ms. Yumi Yoshikawa, who spoke about the project she carried out in cooperation with the Minamisanriku Industry and Tourism Development Office to revive the custom of creating “kiriko”, paper cut-outs with various designs. Traditionally, kiriko are made by the head priests of the local Shinto shrines with pure white paper to decorate each family’s Shinto altar in their home over the New Year season. The various kiriko, depicting the bounty of nature and locally produced goods such as saké, represent the many blessings in people’s lives and are a way to express gratitude for what makes life good. 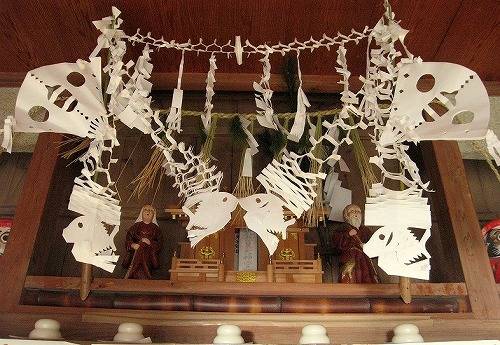 An altar decorated with kiriko

In 2010 a group of women in Minamisanriku visited houses throughout the community and talked with people about their treasures and memories, and they then created kiriko for each house based on these conversations. They ended up making 650 different kiriko that year. Then, in February of 2011 they began planning for what looked to be an even bigger response to their project, but this was cut short when the entire community was swept away the next month in the March 11th tsunami. Once the devastation was cleared, the group created 230 kiriko that were displayed in two of the temporary shopping centers built for evacuees, and then created 61 large-scale cut-outs from aluminum compound boards that were set up, facing the sea, on the sites of 28 destroyed homes, along with brief descriptions of the people who had lived there. These kiriko served as expressions of courage and dignity of the people, and as a way to remind them of their traditions and their hopes. The reaction from residents was overwhelmingly positive, with one person saying, “I feel happier about having this kiriko here than I would with having a new home on this spot.” 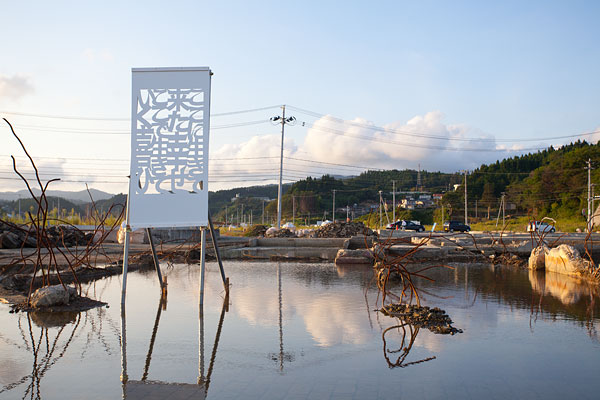 One of the kiriko panels, set up after the March 11th disasters

Each of these projects has been recognized for its effort to face the challenges of today through calling on the strength of tradition and memory in order to move into a better future, and each is a wonderful example of how vital it is to both respect ones roots while innovating for tomorrow.