This year’s JETAA USA National Conference was held from September 26th to the 29th in Minneapolis, with representatives from all 19 US chapters attending. Along with CLAIR and MOFA representatives, the alumni were joined by Paige Cottingham-Streater and Laurel Lukaszewski from the US-Japan Bridging Foundation (USJBF), who were there to talk with the alumni about the project they are currently working on, to investigate the idea of creating a formally recognized national alumni support organization. Pamela Fields, from the US-Japan Conference on Cultural and Educational Interchange (CULCON), also attended. The conference started off on Thursday evening with a reception held by the USJBF and featuring former Vice President and Ambassador to Japan Walter Mondale, who spoke very warmly about the importance of the JET Program and the role the alumni play in US-Japan relations. 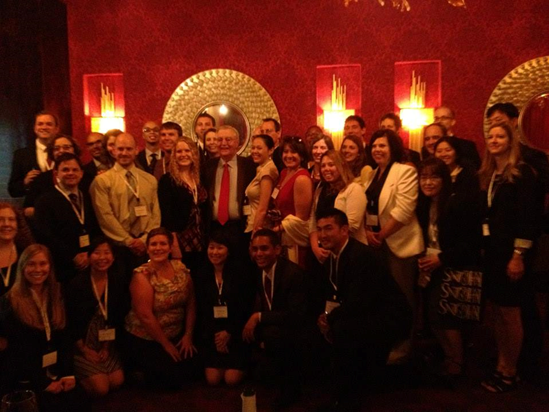 On Friday, Saturday, and Sunday there were a series of presentations on the USJBF initiative, which were interspersed with sessions devoted to sister city and state relationships, ways to better serve alumni who are members of chapters as well as those who are not, and administrative issues of receiving CLAIR and MOFA funding and organizing effective chapter governance. Regge Life spoke about making the film, Live Your Dream: The Taylor Anderson Story, and Wesley Julian gave an update on the film he is working on, Tohoku Tomo, about JETs (including himself) who were caught up in the March 11th, 2011, disasters and contributed to relief and recovery efforts. The JET alumni have been focusing for years on strengthening their chapters and their ability to work together as a national body, and they are now increasingly being recognized by the US government and other organizations working to support the US-Japan partnership as a vital source of expertise and experience to carry this partnership forward. We look forward to the alumni becoming more active and influential in this role, even as they continue to support the activities of their prefectures and communities in Japan and the JET Program itself.   Matthew Gillam Senior Researcher