Governor Takuya Tasso of Iwate Prefecture gave a talk at Japan Society in New York on Monday evening, August 26th, entitled “Thank You Tomodachi (Friend)”, to review the events of March 11th, 2011, introduce measures being taken to foster recovery in the prefecture, and to thank everyone for their support since the Great East Japan Earthquake and Tsunami.

The Governor outlined the prefecture’s Open Reconstruction Policy, carried out with the support of the Iwate Sanriku Reconstruction Bridging Foundation, and its Community-based Reconstruction Policy, carried out in partnership with local governments. He then laid out the three principles of the prefecture’s overall reconstruction plan, which are: 1) Ensure public safety through restoring and upgrading hard infrastructure such as roads and tsunami barriers, as well as soft “infrastructure” such as improved evacuation procedures; 2) Rebuild lives through providing support and counseling to survivors, Japanese and non-Japanese, and rebuilding educational and medical facilities; 3) Reboot industry, especially through rebuilding the fisheries, but also through aggressively promoting Iwate products nationally and internationally.

Governor Tasso also spoke on the designation of Hiraizumi as a UNESCO World Heritage Site and the recent selection of a site in Iwate as a candidate for construction of the International Linear Collider and Iwate’s partnering with Miyagi Prefecture in pursuing this.

After Governor Tasso’s talk, Drew Schufletowski, from the State Department, spoke on the strength of the US-Japan relationship and its importance to the security of the Asia Pacific region and the world. Then, Gary Moriwaki, of the US – Japan Council, spoke about their volunteer and relief efforts in the region.

This was followed by a performance by the singer Ms. Junko Yagami, who has been very active in travelling around the disaster zone in Tohoku to perform for survivors and in fundraising for various relief and reconstruction efforts. She sang some of her hits as well as songs she wrote specifically for the survivors. This was followed by a spoken performance by three elementary school girls and their teacher.

The second half of the evening was devoted to showcasing a variety of products from Iwate, including wagyu beef, sake, and sushi. During the reception, where guests could mingle, talk, and sample the wonderful Iwate specialties, a performance was given by the Iwate Folk Music Association, playing traditional music.

Several JET Alumni Association of New York members were invited to the event and had a chance to speak with Governor Tasso to express their ongoing attachment to the prefecture and their happiness that Iwate seems to be recovering so quickly, even if everyone understands how much is still to be done. The chapter has been, of course, pivotal in supporting the JETAA USA Relief Fund, which made several strategic donations to relief and recovery projects in and around Rikuzentakata, so chapter members are especially heartened to see life improving for people in the disaster zone and throughout Iwate.

All-in-all, it was a wonderful evening, and it seems safe to say that everyone in attendance went home with a new understanding of what Iwate has to offer and admiration for the energy and resilience of the people there. 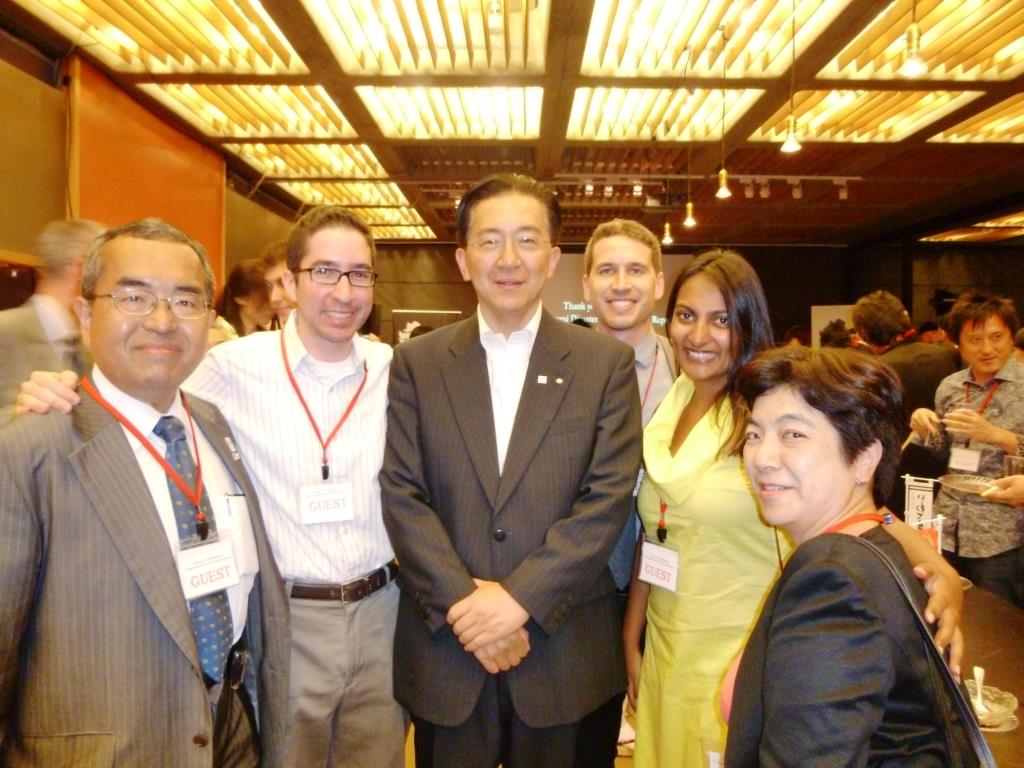 Members of JETAANY who served in Iwate greet Governor Tasso, along with JLGC’s Mr.Ogata and Ms. Imazeki, September 3rd 2013