On June 10th, New York City’s Office of Emergency Management (OEM) and the Department of Design and Construction (DDC) officially unveiled the first prototype in the US for a ready-made, modular, post-disaster housing unit specifically designed to meet the needs of a crowded urban environment such as that in the Five Boroughs and the greater New York City region. 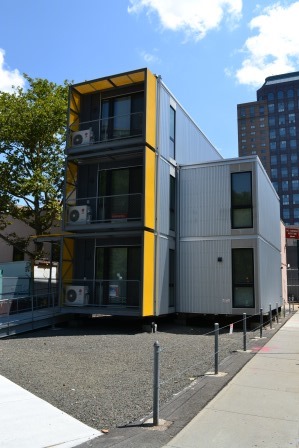 The prototype unit is three stories high, with two 813 square foot units that would have three bedrooms and one 480 square foot unit with one bedroom. All models have a bathroom, as well as a kitchen with Energy Star appliances and living area complete with storage units and a pull-out sofa bed. They are designed to be completely barrier-free, from the showers with no sill to the kitchen counters with extra height and width to make them wheel-chair accessible. The only limitation is that the proposed housing units created from these modules would not have elevators or access ramps above the first floor. The lack of elevators also limits the unit’s height to four stories maximum, at least in New York City.

Pleasantly finished in a modernist, Ikea-type aesthetic, the apartments have cork floors, plain white walls, tiled bathrooms, and cabinets made out of durable, unadorned film faced plywood, often used for concrete forms. The units were designed by Garrison Architects in Brooklyn for American Manufactured Structures and Services (AMSS), the Virginia company that built the prototype. The Department of Design and Construction, along with OEM and other agencies, was heavily involved in the planning phase. 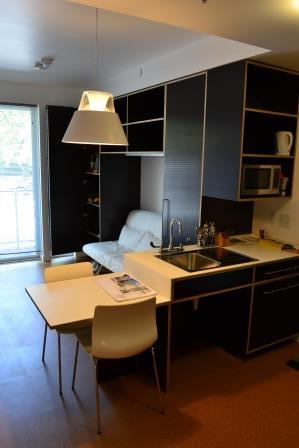 The post-disaster housing project actually began several years ago, well before hurricanes Irene and Sandy highlighted the vulnerability of so many of New York’s neighborhoods. In 2008, OEM, in partnership with DDC, the Rockefeller Foundation, and Architecture for Humanity, held a competition soliciting innovative designs for temporary housing suited to an urban environment. Called “What If New York City…”, the competition produced ten winning designs and ten honorable mentions from over 100 submissions.

However, while the winning designs are certainly innovative and thought-provoking, the City, after issuing a Request For Proposals (RFP) and going through a selection process, decided to work with AMSS to develop a more cost-effective design incorporating input from the various stakeholders involved. This process produced the prototype now on display in Brooklyn. The competition did have significant value, however, in helping to raise awareness of the need for such housing and ideas to meet this need.

There are a myriad of issues to be considered in planning post-disaster housing like this beyond simply designing the space, including where to site it, how to provide utilities, how to handle zoning and permit requirements, and both how to get residents into a unit and how to get them back out again so they don’t stay permanently. Discussion on all these many topics is ongoing, and OEM reports that having an actual example of housing in place has greatly facilitated the conversation.

Over the coming year, OEM will have some of their personnel stay for a few days at a time in the units to evaluate them (you can follow reports on this on their Facebook page) and will give tours to people interested in learning more about the project.

Plans for the prototype can be found on the AMSS website and the OEM issued a press release on the unveiling.