What Americans Think About Their Governments

Background
Annually, since 1998, the Pew Research Center for the People and the Press (PRC) conducts a poll of Americans to gauge their opinions, favourable and unfavourable, toward American federal, state and local governments. Though questions vary somewhat from year to year, certain basic themes are kept constant. Also, the Center’s focus tends to be mainly on state and federal governments. Finally, the results of its surveys, generally, make news nationally and are often featured prominently on the television and in the press.

For Japanese governments note should be taken, particularly since ‘polling’ has become a mainstay of Japanese news agencies and newspapers on almost every topic of interest in Tokyo. One thing, if more than any other, is that polls are being used by interested parties (call them ‘special interest’ groups) to attack or defend policies, politicians or political parties. Moreover, the focus in Japan has been almost exclusively on the central government with much less attention paid to prefecture and local governments. As the ‘decentralization’ policies continue to move forward, that attention may well shift to the prefectures and local governments as they will become thus the object of a closer scrutiny by the public at large. So, the results of polls in the United States, in particular, where public opinion as part of the national dialogue is a fundamental, are worthy of close attention.

Highlights
There are two main points to be made concerning the most recent PRC poll. The first is that only one-third of Americans have a favourable opinion of the federal government – almost two-thirds have an unfavourable opinion. There seems to be little room for doubt in the minds of those polled. This attitude of the public is the lowest recorded in such a poll in the last fifteen years. 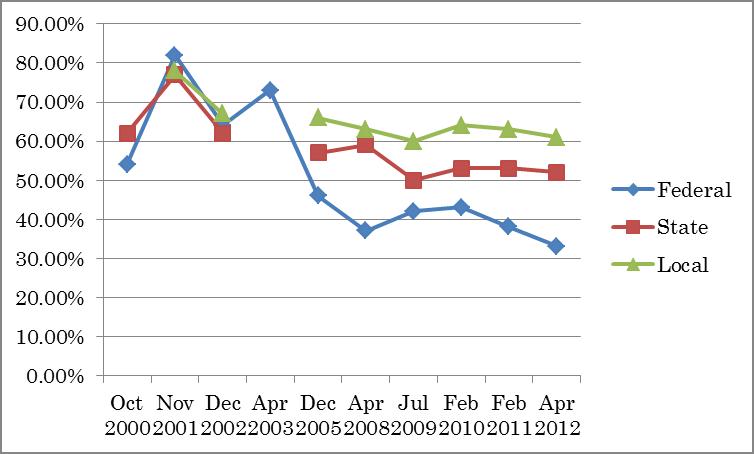 Incidentally, in 1995, Gallup had recorded that 39 per cent of the American public feared the federal government as an ‘immediate threat’ to their rights and freedoms. So stunned by the response, the organisation asked the question again, just dropping the word ‘immediate’. A full 52 per cent agreed with that statement. This poll was but a couple of weeks before the Oklahoma federal building bombing.

The second main point in this survey, as one can see from Figure 1, is the steady decline in positive attitudes toward all governments over the past ten years (2002-2012). Most striking to note is the fall from favour of the federal government; from a 64 per cent favourability in 2002 to a 33 per cent favourability in 2012. To be sure, some of the reason for the drastic drop off is owing to the surge in a positive attitude that followed the attack on the World Trade Center and subsequent initiation of the wars against the Taliban and Saddam Hussein of Iraq. In late October 2000, the favourable rating was 54 per cent, whilst by mid-November 2001 it was 82 per cent, in December 2002, it was 64 per cent and in April 2003, after the war in Iraq had begun, it was 73 per cent.

Unfavourability ratings, naturally, are the inverse; and they have all increased. Whilst in 2002 no level of government had received a majority unfavourable opinion (the states had the least favourable rating at 31 per cent), a full 62 per cent of Americans had a poor view of the federal government in 2012, with the states and local governments lagging far behind, at 42 per cent and 31 per cent, respectively.

Details
Political party has become the lodestone of public attitudes and that indicates a hardening of opinion. Figure 2 is illustrative of this hardening. 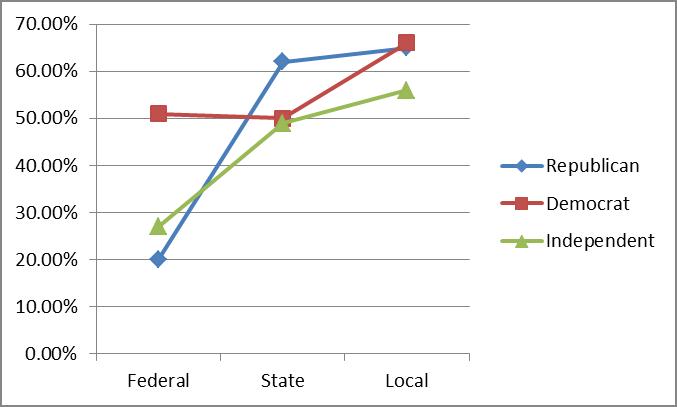 The remarkable fact that becomes apparent when looking at the details behind the results is the divide by political party. In 2012, 51 per cent of Democrats looked favourably on the federal government. Only 27 per cent of independents and 20 per cent of Republicans did. Now, compare that with views expressed by Americans of different political persuasions to the federal government during the administration of the prior president, George W. Bush. At that time, 2008, only 29 per cent of Democrats had a favourable opinion of the federal government, whereas 53 per cent of Republicans and 33 per cent of independents did. These results are not quite comparable, since the views of Americans were tempered by eight years of an administration under George W. Bush with only four years under Barack H. Obama. Perhaps, though, an even more interesting fact that has come out of the current research is the change in opinions during the current administration. From 2009 to 2012, Americans of all political persuasions appeared to have lost confidence in the federal government. Overall, the change is a drop of 9 per cent. By party, it is even more noticeable. Republicans, not surprisingly, would not have had a positive attitude in the first place and their opinion has only worsened by 4 points. For Democrats and independents, however, the drop is much more significant; 10 per cent for the former and 8 per cent for the latter.

(b) State governments
The view of state governments somewhat mirrors what has been happening to the federal government. Nevertheless, there is a difference. Opinion of the states declined from 2008 to 2009, in part because of the financial crisis and its effect on them. Since then their positive reputation has evened out and held steady; actually increasing a very small amount (50 to 52 per cent).

Dig a little deeper, as Figure 3 shows, and one finds an even starker contrast by political affiliation. In those Republican-governed states 70 per cent of Americans who identify themselves as Republican or leaning Republican approve their state governments with only 39 per cent disapproving. Democrat Americans, naturally, give only a 43 per cent approval, with a 52 per cent disapproval. In the Democrat-governed states just 55 per cent of Americans who identify themselves as Democrat or leaning Democrat approve their state governments with 40 per cent disapproving. Republican Americans give those states only a 33 per cent approval rating and 64 per cent give them a negative opinion. In those states, there are 18 of them, where government is shared between the Republicans and the Democrats, approval is somewhat even – both 55 per cent of Republican and Democrat Americans give a positive rating for the states and 40 per cent give a negative opinion. 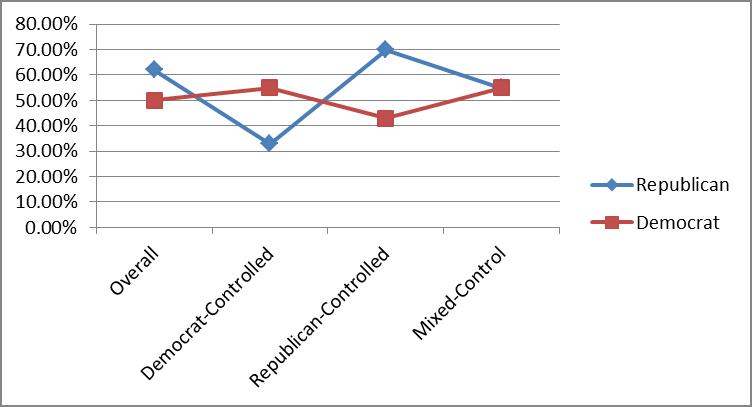 The poll attempted to question a little deeper into Americans’ attitudes toward state and federal government activities by asking the respondents to provide more specific and defined opinions.

1. Corruption. The answer to questions about corruption usually elicits an emotional response, but nevertheless the poll produced an instructive view of government. When asked whether or not their state or federal governments were mostly honest or mostly corrupt, Americans had a distinctively different view of each – and states won out easily. 49 per cent of Americans believed the states to be honest but only 31 per cent believed the federal government to be so. Moreover, only 37 per cent thought the states were corrupt, yet a majority (54 per cent) opined that the federal government was corrupt. That difference is telling.

2. Political nature of government. When asked about the partisanship of government, Americans showed the same division between the state and federal governments. A slight majority (53 per cent) thought states were too partisan, but three-quarters believed the federal government was divided along party lines.

Conclusion
The most noteworthy aspect of this poll is the distinction that the American public makes between the states and the federal government. It is, perhaps, a truism, one which Alexis de Tocqueville noticed in his travels through America during the 1830s, that people tend to favour what is local and tangible to them over the removed nature of a national government operating at some distance and without an immediate effect on their lives. This is borne out quite clearly in the poll, though even the states are considered somewhat remote. Compounding that, moreover, is the finding that all levels of government have suffered from a growing distrust on the part of the public over the last ten years. The questions asked of Americans in this poll do not elicit a firm cause of that distrust but the theme that runs through their answers seems to suggest that they do believe the federal government, most definitely, and the states, more generally so, are not up to the job.