Municipality in Tokyo bans smoking on the street

In April 2010, Chiyoda Ward in Tokyo, where the national government offices are concentrated, enacted legislation banning smoking on all streets except within the Imperial Palace. 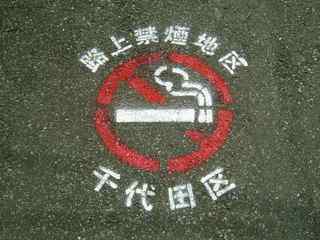 Chiyoda was the first municipality to restrict smoking on some roads, in 2002, imposing a fine of 2,000 yen ($24.90) on violators. Since the enactment of this ordinance was announced in Chiyoda, similar ordinances have been enacted in a lot of municipalities around Japan and now smoking in a lot of public places is prohibited. The fine is basically collected by the staff of Chiyoda Ward. Payment can be made either at the time, when the ticket is handed out, or later at a bank or a post office. Between 2002 and the end of December 2010, 60,581 have been fined (of which, 45,039 people paid on site), and discarded cigarette butts have decreased sharply around the area.

The enactment of this ordinance comes back to the starting point of autonomy, the idea that “Our towns should be cleaned by ourselves.” It is not a top-down demand but rather something done by residents and entrepreneurs. Please see Chiyoda Ward’s homepage at (http://www.city.chiyoda.lg.jp/index.html) for details of this ordinance.