Los Angeles and the fight to reduce congestion

Many Japanese officials may have visited Los Angeles, a sprawling city on the West coast. They may have noticed the constant traffic jams no matter what time of day or, for that matter, what day of the week. Some may have even attempted to drive in the city and experienced the congestion first-hand. Los Angeles is a typical American city. It loves its cars. Every attempt to encourage the use of public transportation has met with little success. So, why is it celebrating now?

Back in the days of the 1984 Olympic Games, held in Los Angeles, the city tried to make the traffic patterns around the Olympic Village and main events easier and less congested. How? This was the beginning of an attempt to synchronise all the traffic controls in the city. It has taken thirty years almost and $400 million. Now, the city is the first in the world to have synchronised every traffic signal – all 4,500 – across 469 square miles.

The programming for the system was undertaken in-house by city computer engineers. It monitors the roads through the use of sensors embedded in the pavement which relay information to the central control station every second. Remarkably, the information about traffic speed and congestion is sent to the main computer that can adjust settings on all traffic signals automatically. The software is good enough to self-correct even before a city engineer can override the system manually.

Mayor Villaraigosa is especially proud that his pledge to complete the project before his term is completed in June this year has been fulfilled. As he said, “by synchronizing our traffic signals, we spend less time waiting, less time polluting”. Though it may seem trivial, travel times are down by 16 per cent. Average speeds are up from 15 m.p.h. to 17.3 m.p.h. 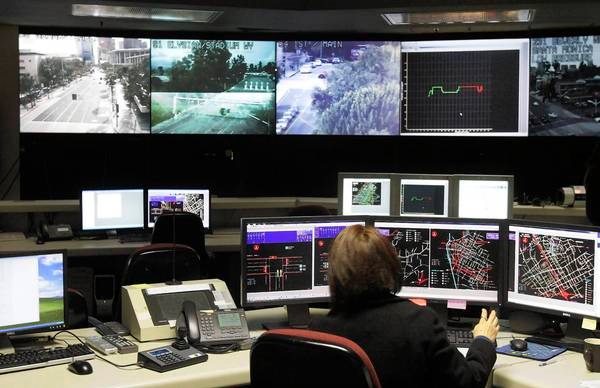 City engineers keep an eye on congestion at the traffic surveillance center under the City Hall annex.