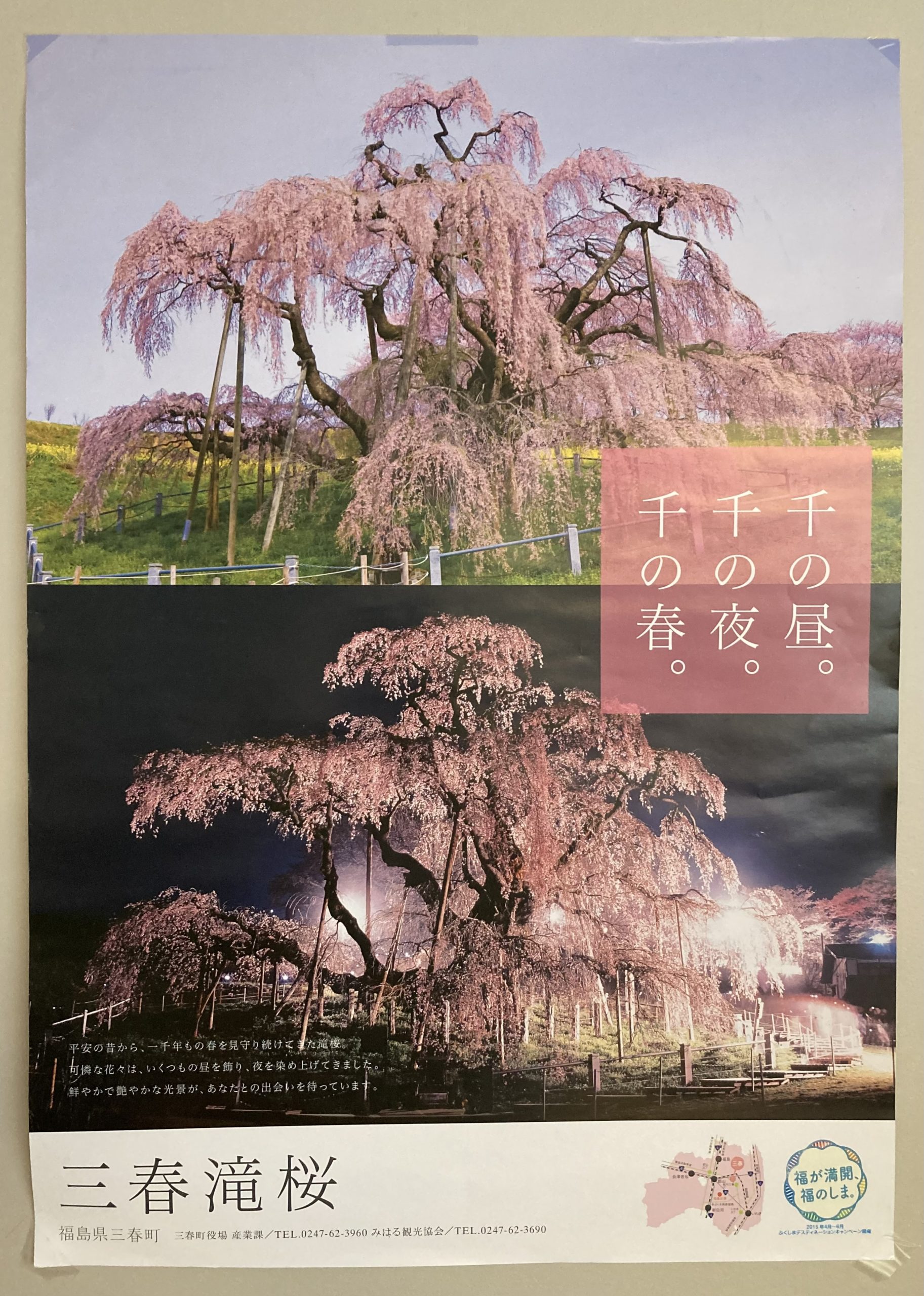 A poster celebrating the Miharu Takizakura

Not All the Cherry Trees Are in Washington

In 2013 the Tokyo Metropolitan Government gifted dozens of cherry trees to the people of New York City to commemorate the 100th anniversary of trees being presented by Tokyo to New York in 1913.

These new trees were grown from seeds taken from one of the three great cherry trees of Japan, the Miharu Takizakura weeping cherry. The seeds passed through two years of USDA quarantine before arriving here as saplings in 2015, and over the intervening years have been cared for by the New York City Parks Department. Since 2016, they have gradually been planted out around the city as manifestations of the bonds between the two sister cities, as well as their mutual resilience and perseverance through hard times such as the March 11, 2011, Great East Japan Earthquake and Tsunami (often referred to as “3.11”) and Superstorm Sandy. Adding to this is the fact the Miharu Takizakura is located in Fukushima Prefecture, which was hit by not just the earthquake and tsunami but also the disaster at the Fukushima Daiichi Nuclear Power Plant, giving the community of Miharu Town and the people of Fukushima their own distinctive experience with resilience and perseverance.

This project itself has been challenging, since only about half the donated seeds sprouted, and only about half of those were the highly-valued weeping cherries like their mother. On top of this, a number of saplings were lost to accident and disease.

Of the trees, weeping and non-weeping that arrived alive (in roughly chronological order of the event):

Despite devoted care by the staff at the Citywide Nursery, a number of other trees succumbed to verticillium wilt (a fungal illness) before they could be planted out.

We’ve been checking on the surviving trees, and this is what we’ve found:

Officials at the planting ceremony in Prospect Park in April 2016

Ethan Lustig-Egrably, Director, Government & Community Affairs at the Brooklyn Botanic Garden, with the one surviving weeping cherry there. Ethan said the plan is to plant it out in either the Cherry Esplanade or the Japanese Hill and Pond Garden, probably sometime this year.

This is the “Jane Goodall Tree” in the Kingsbridge Green area of Van Cortlandt Park. Dr. Goodall planted the tree as part of an event she did there for her “Roots and Shoots” initiative in September 2016, along with Richie Cabo, who was director of the Citywide Nursery at the time.

This is the tree planted at PS 122 Queens, in Astoria, to commemorate a student. It is only semi-weeping and would not be counted as a “takizakura” (literally, “waterfall weeping cherry”) like its mother, but it should nonetheless grow into a beautiful tree. 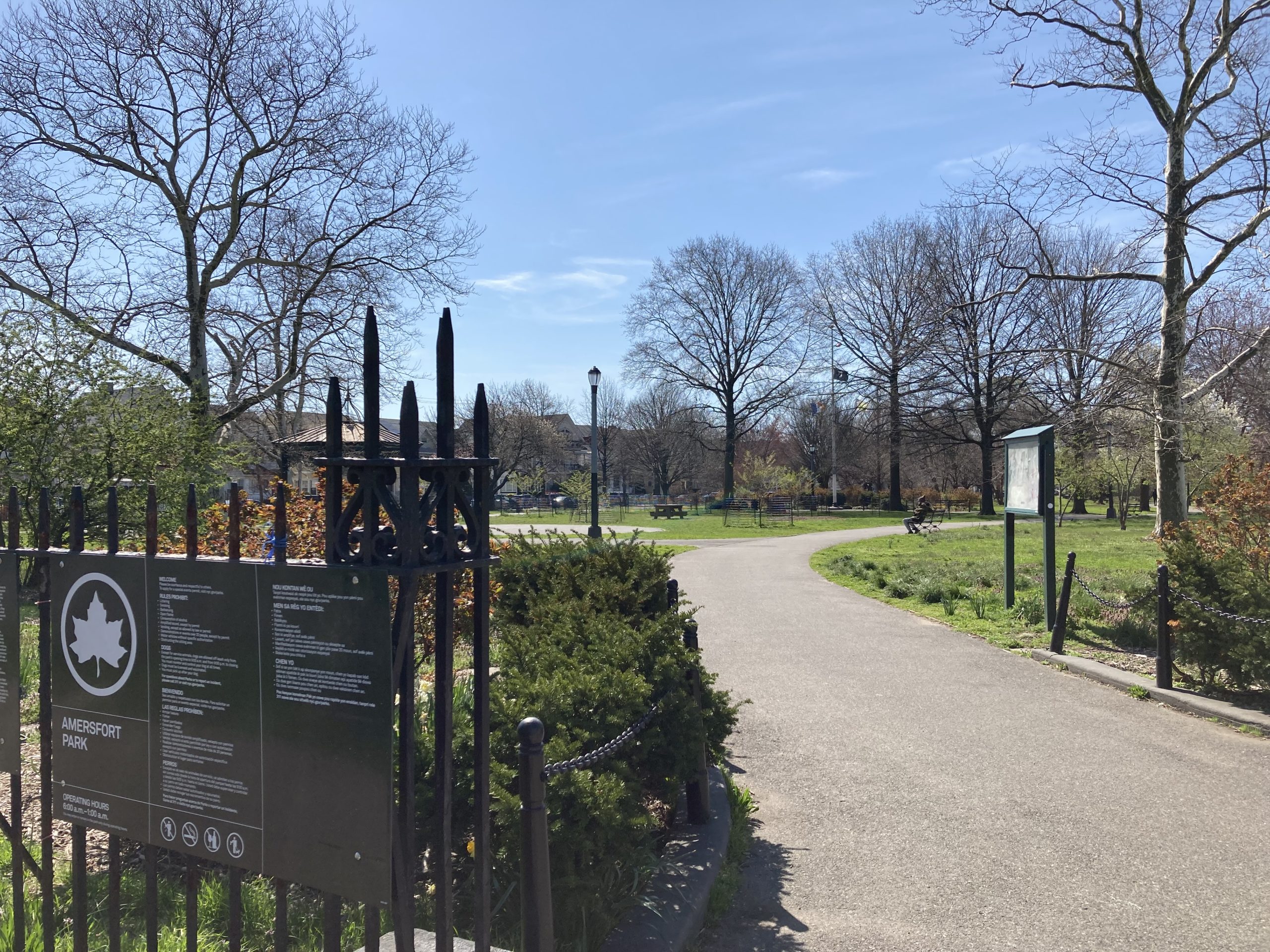 The Amersfort Park grove, seen from the northwest entrance to the park. These trees are still quite small. 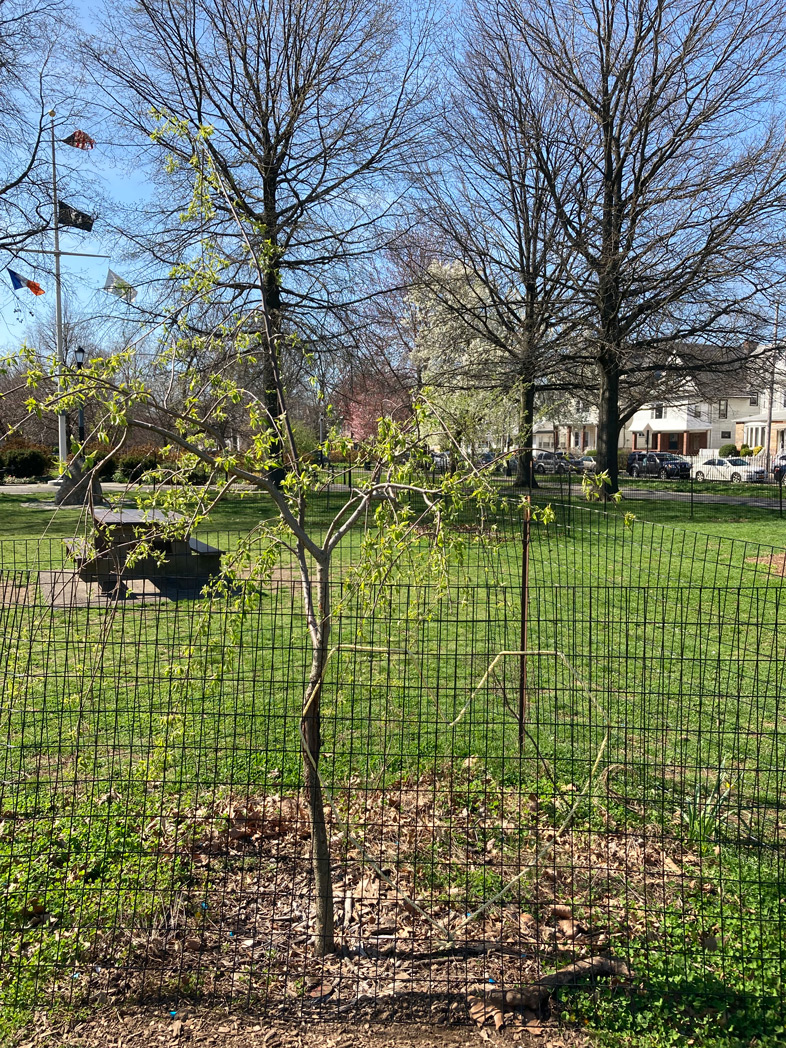 The one weeping cherry in the grove of six trees. 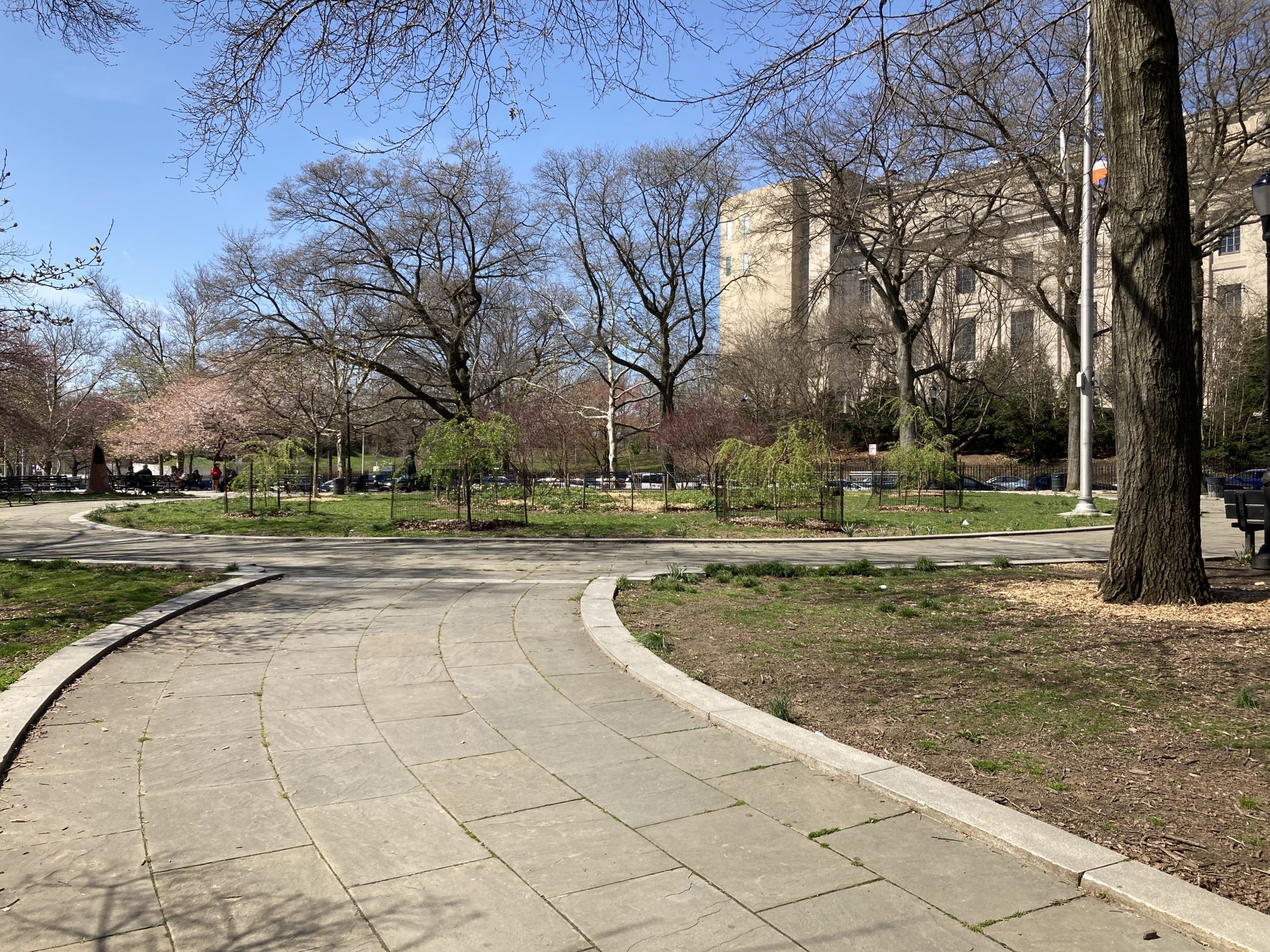 The McNair Park grove, seen from the northeast entrance.

One of the five beautiful weeping cherries in the grove. 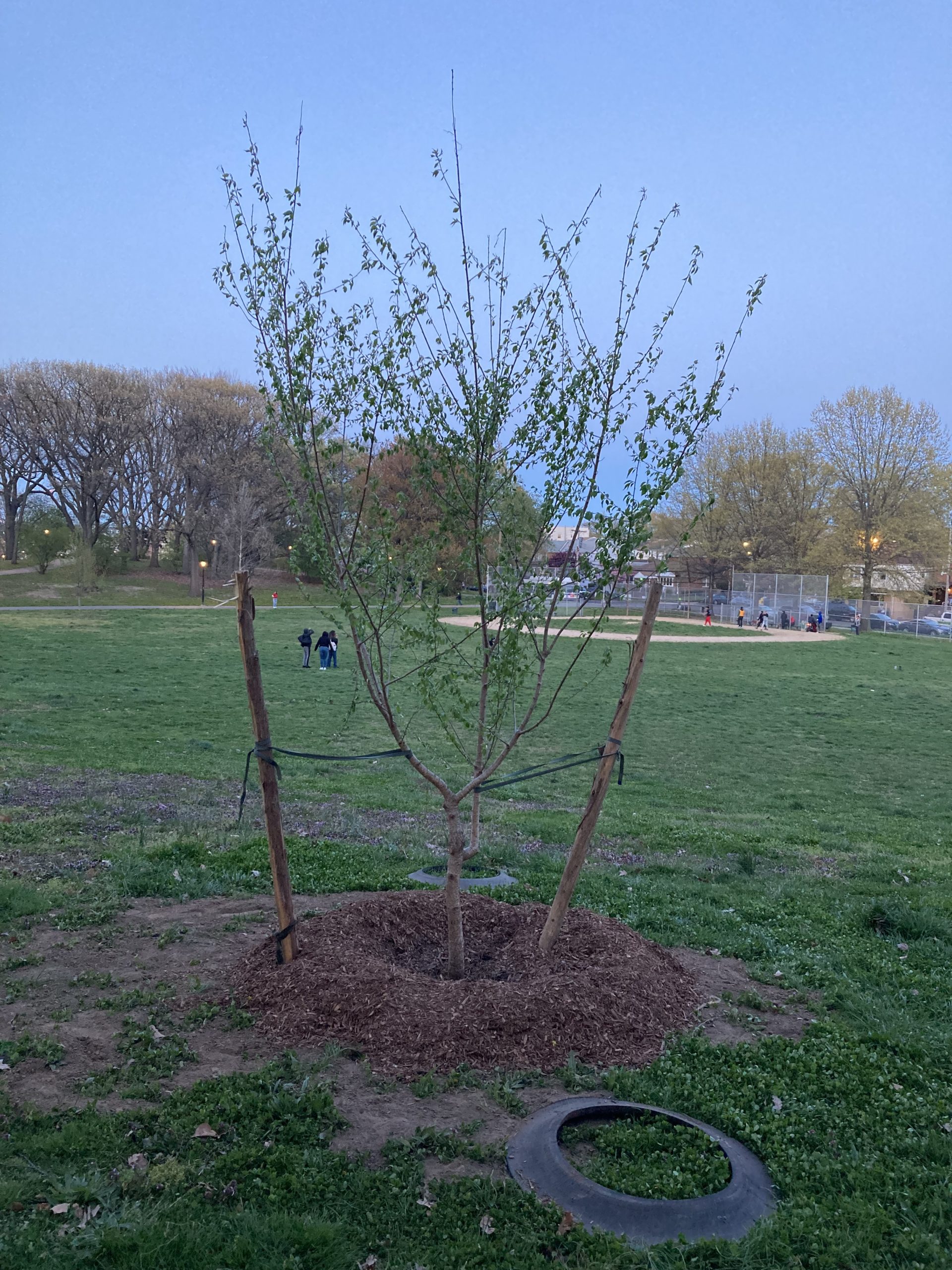 One of the non-weeping trees, recently planted in MacNeil Park in Queens.

One of two trees planted out at the Citywide Nursery (the other was transplanted to MacNeil Park). 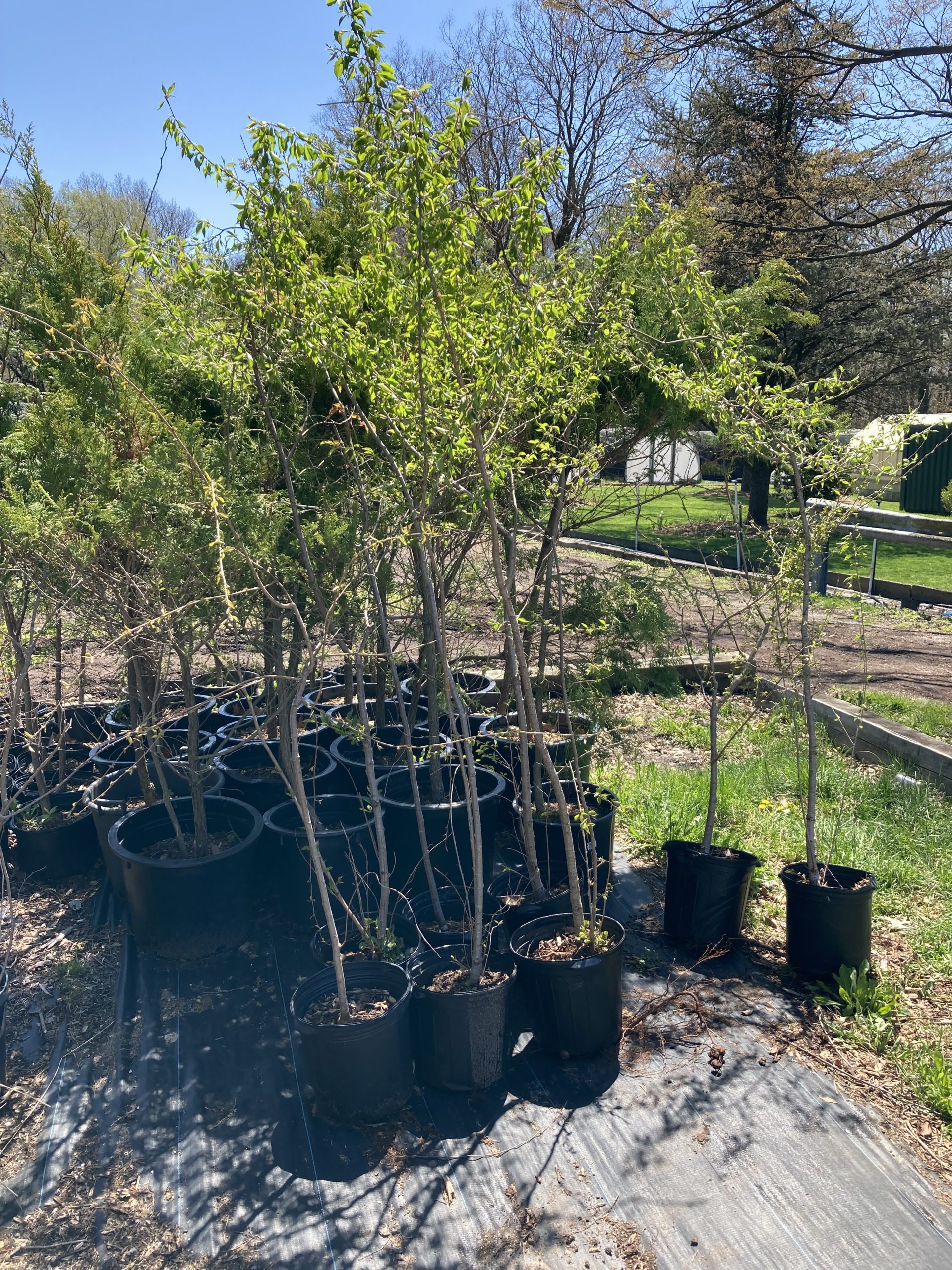 The other known survivor, which was a sister city gift from Miharu to Rice Lake, is in Eau Claire, Wisconsin, at the University of Wisconsin Eau Claire Campus, about an hour south of Rice Lake. We are told it is in a sheltered spot, with the UWEC Japanese Garden, in the inner courtyard of a building on campus. We very much hope to have photos when it blooms this spring.