Recently, staff of the Japan Local Government Center (CLAIR, New York) was fortunate to attend an event at the Japan Society that featured Hiroshi Nakaso, the deputy governor of the Bank of Japan. He gave an insightful talk about what the Bank is doing now and how Abenomics is progressing, together with an idea of what is needed to spur the Japanese economy in the near future. Mr. Nakaso has been with the Bank for almost 40 years and has seen much and has been responsible for crisis management in the financial markets. So, his talk was timely and instructive in these uncertain economic times.

He began by discussing what he thought was one of the main culprits in the current Japanese economic situation. That was the level of labour productivity. Productivity growth was 5 per cent in the 1970s, even 4.5 per cent in the 1980s. Since 1990, however, it has dropped to an anemic 1.5 per cent. What is even more important is that this drop has coincided with an increase in the labour pool because more women are working and more elderly are continuing to work. As evidence of this slowdown in productivity Japanese manufacturing is now lagging their Western counterparts. Mr. Nakaso suggested it was now about 35 per cent below that of the United States. And yet, Japan’s productivity growth is quite high, second only to the United States.

So, the debate has concentrated on the position forwarded by Lawrence Summers; namely, what he calls ‘secular stagnation’. Though that term is ill-defined, the questions that linger are whether or not this economic state will become permanent and what are its causes? Mr. Nakaso argued that one should not wait for an academic resolution to these questions. Instead, both a monetary and fiscal approach together with structural reforms were needed right now. A labour market supply has grown (the increase in the number of women in the workforce and the elderly staying beyond retirement age) and the political will to provide a demand stimulus (generally by the Bank of Japan) has increased. These two show that demography is key to the Bank’s desire to undertake Quantitative Easing (QE) to fight deflation and reach the inflation target of 2 per cent.

In the end, Mr. Nakaso said that productivity growth was essential. He added that to get this productivity growth Japan needed a greater role for innovation; not only in the business sector but also in the legal realm and in education. In other words, there needed to be structural reform to the economy. How much progress had there been? Some but not enough. This was particularly true of policies regarding women and the elderly and the participation in the economy.

Potential growth is not reaching its goal. The corporate sector is amassing money in ways it has not done so before. In the boom years, 1980 to 1995, there was more investment than saving but since then, from 1995 to 2015, there has been more saving than investment by the corporate sector. So, the expected growth has not happened. Nominal wages have increased very slightly, there has been low productivity growth and a pervasive deflation mindset.

Finally, Mr. Nakaso discussed the much talked about negative interest rate decision by the Bank of Japan. He explained that when the natural interest rate decreased the Bank of Japan has to reduce the nominal interest rate even further. Quantitative Easing has definitely had its effect. The Consumer Price Index has remained positive for the last 27 months. The Bank’s purchase of Japan Government Bonds exerts a pressure on a whole range of interest rates and since the Bank’s reserves are far larger than those in Europe it is intending to continue to make these purchases at 80 trillion Yen per year.

There was a lively question and answer period after his talk. One question wondered whether or not the Bank of Japan’s decision to introduce negative interest rates contributed to the recent drop in global markets. Not really so was the answer. There seems to be an excessive risk-averseness on the part of investors and the recent oil-slump may have been the bigger culprit for the effect on the Chinese stock market. Another question asked whether or not negative rates will have an effect on the Bank of Japan’s profitability. Again, the answer was not likely. This is in part because the rate structure was carefully divided into three tiers (see below) – not that it was easy to explain what the three tiers actually did! 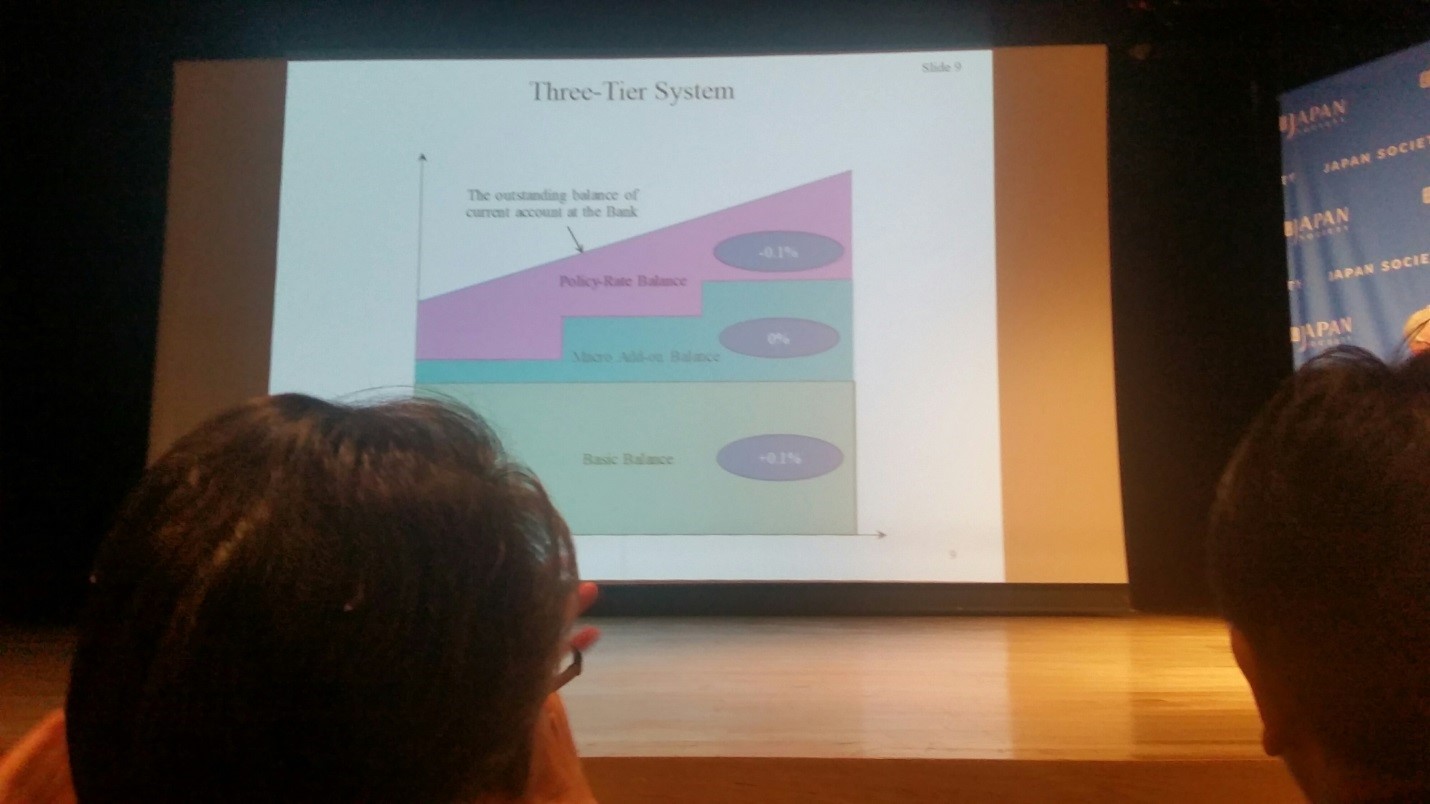 In all, it was a very informative talk by Mr. Nakaso.