RMJETAA Gets Things Moving at the Denver Kizuna Reception

The Rocky Mountain JETAA chapter recently participated in the Kizuna Reception hosted by the Consulate General of Japan in Denver and the Japan America Society of Colorado, representing the JET Program and bringing a bit of Japanese fun to the festivities by way of rajio taiso. Held on March 22nd, the event was a celebration of the many student exchanges between Colorado and Japan and the support given to Tohoku following the 3.11 disasters. Among the attendees were the students from Littleton High School who just returned from touring the affected areas in Tohoku, exchange students from Sendai now visiting Littleton, and the Montbello High School Drum Line, who will be traveling to Takayama, Gifu-ken, in early summer to help inaugurate the new non-stop air service between Denver and Tokyo. The mayor of Littleton, Ms. Debbie Brinkman, and military personnel who participated in Operation Tomodachi also attended.

Among the opening remarks touching on so many aspects of the relationship between Colorado and Japan, RMJETAA representative Jessyca Livingston led a moment of silence in memory of Taylor Anderson and Monty Dickson, their communities, and all the lives lost in the disasters.

After this, the Littleton High School students performed a New Orleans jazz piece, the Sendai students sang an a cappella version of Country Roads by John Denver, and the Montbello Drum Line rocked the house with a drumming performance.

Then RMJETAA members brought the Sendai students up for a round of rajio taiso and encouraged everybody to join in, even getting the Consul General to show his moves.

The next job for RMJETAA, following their big night out at the Kizuna Reception, will be to conduct orientation sessions for the Montbello Drum Line prior to their departure for Japan. With their knowledge of the country and its culture, as well as their deep familiarity with the schools and student life, the JET alumni are the perfect resource for this kind of support activity. 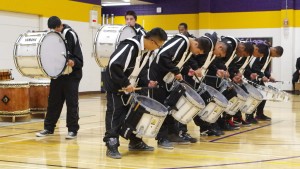 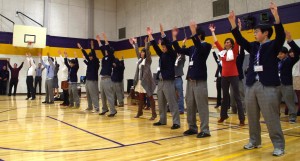 RMJETAA and the Sendai students lead a rajio taiso workout.