The New York City Comptroller’s Office issued an audit report on March 31st detailing the failings of the city’s Build It Back program for single-family homes, begun by Mayor Bloomberg in 2013 and continued, with major changes, by Mayor de Blasio. Based on an audit of the program and information from six public hearings conducted by the Comptroller’s Office, the report is damning in its assessment of the ongoing failure of the city’s Housing Recovery Office (HRO) and the Mayor’s Office to properly monitor and oversee the program, resulting in unnecessary hardship for homeowners affected by Hurricane Sandy and millions of dollars of waste and improper payments. 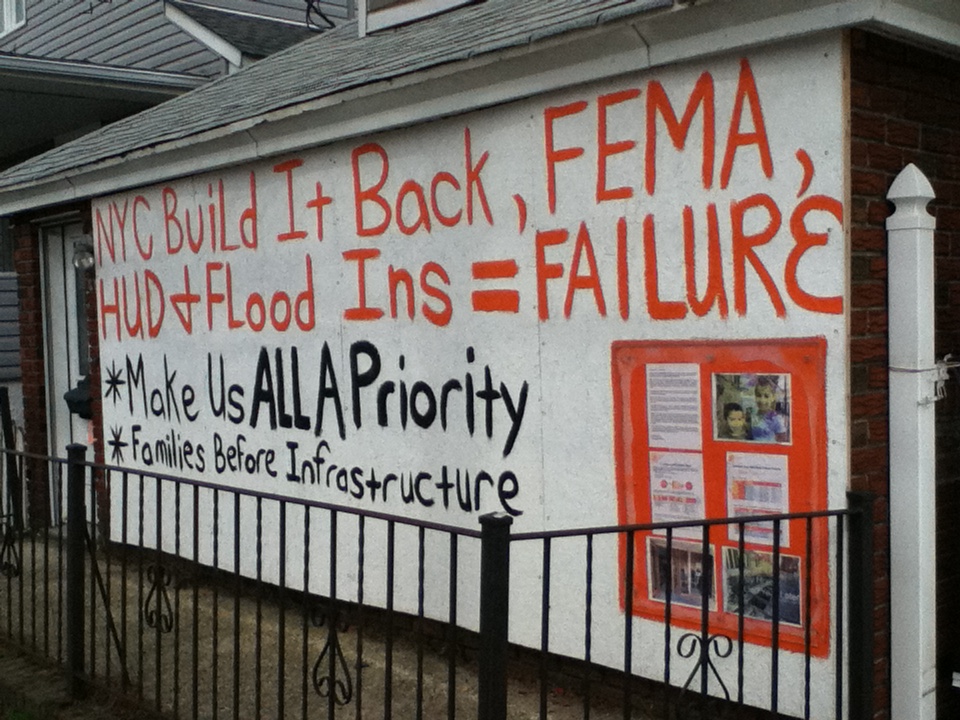 Immediately after Hurricane Sandy ravaged large parts of the city in 2012, the Bloomberg administration hired a consulting firm to design a program to assist homeowners in rebuilding their homes. The City then contracted with a financial management firm to oversee and manage a number of subcontractors, who were to provide intake assistance to homeowners seeking aid, process applications, determine eligibility, offer customer support, and help applicants navigate the application and approval process for receiving financial aid and contracts with companies to do the work necessary to restore their homes. Ultimate oversight of the system was the responsibility of the Housing Recovery Office, under the Mayor’s Office.

It was known from very early on that the program had serious problems, with complaints from people in the affected areas being picked up by the media and eventually recognized by the City. However, there were only minor changes to the program until Mayor de Blasio came into office.

Among the report’s key findings:

HRO approved $6.8 million in payments to contractors for incomplete and insufficiently documented work, including payments for the processing of incomplete applications from homeowners that then had to be returned for further information, adding months of delays and added costs. HRO also approved $245,000 in payments for deliverables that had already been paid for, $443,247 for improperly documented consultant hours, $719,940 in consultant costs with no activity reports whatsoever, and $74,200 in unsubstantiated travel expenses.

Although contractors were required to hire Housing Recovery Specialists who had two years’ experience in case management or similar work plus a bachelor’s degree in social work or a related field, a review of 154 resumes showed nobody had a degree in social work and only 29 percent had a bachelor’s degree of any kind. Applicants reported that staff frequently did not understand the program or its requirements and could not provide basic information. Furthermore, because HRO abandoned the initially-promised model of having a single specialist take responsibility for a case from beginning to end, applicants routinely found themselves talking to a new person who did not know anything about their case.

Between negligent oversight and staffing issues, applicants were often required to submit the same paperwork multiple times and then suffer through the consequent delays while often living in horrible conditions in houses damaged by Hurricane Sandy flooding.

Homeowners’ frustration was compounded by poor communications because the contractor responsible for informing applicants about missing or incomplete documentation did not create procedures to do this until four and a half months after the program began, and even then still did not provide timely, accurate, or effective communications with applicants. Nearly 90 percent of applicants contacted by the Comptroller’s Office reported waiting for over one month to receive a follow-up call regarding their paperwork.

On top of the staffing and communications problems, Build It Back was required to conform to at least 64 different federal laws and regulations, plus state and local laws, and guidance documents from the federal Department of Housing and Urban Development (HUD). Furthermore, over 100 procedural changes were made to the program and its forms and applications between August 2013 and July 2014. Not surprisingly, this resulted in considerable confusion and frustration as applicants were forced to fill out difficult-to-understand forms, resubmit documents to meet new requirements, and attempt to navigate the system with little or no effective help.

Now, even though the report states that Mayor de Blasio has substantially improved the program, it also points out that much more needs to be done. For one thing, the report cites the fact that some of the original contractors continue to operate the program without valid contracts. This not only leaves in place people responsible for the original failed implementation, but also limits the City’s ability to hold them accountable for their performance.

Still, according to the report, in August 2013 a mere 13 percent of the original 20,026 applicants were preparing to have work done on their homes, but this has increased to 31 percent by March of 2015. Also, 2,913 homeowners have received reimbursement checks, construction has started on 965 homes, and 506 homes have been completed.

The report recommends that the City should more directly oversee Build It Back and any future programs to ensure responsiveness, accountability, and efficiency, saying it cannot simply contract out operations. This means HRO must employ enough qualified personnel to review invoices, oversee cases, and ensure applicants’ needs are being properly addressed. HRO should also make sure information in the Case Management System is accurate, that requirements and expectations of contractors are clear and, just as importantly, that these are met, and that specific timeframes are established and contractors held to them. Furthermore, it should do this by utilizing City resources as much as possible, making sure it has qualified and experienced staff to design, manage, and assess future disaster recovery efforts. The City should also develop the information technology capacity necessary to train people to use any system that might be adopted to respond to future emergencies.