The City will provide relief for small businesses across the City seeing a reduction in revenue because of COVID-19. Businesses with fewer than 100 employees who have seen sales decreases of 25% or more and that meet certain other criteria will be eligible for zero interest loans of up to $75,000 to help mitigate losses in profit.

The City is also offering similarly eligible small businesses in the five boroughs with fewer than 5 employees a grant to cover 40% of payroll costs for two months to help retain employees.

The City is providing information for parents on city schools, for businesses on restrictions on operations, and for residents on general tips on how to stay healthy and what to do if they get sick, as well as access to updated information on the current situation.

Mayor de Blasio finally responded to demands from parents and educators to close the city’s schools, announcing on March 15 they would close from March 16 to at least April 20. Distance learning began on March 23, and meals for students are available for pick-up at certain schools in each neighborhood around the city.

On the enforcement side, the City presented a plan to Governor Cuomo on March 24, as directed by him on March 22 after seeing crowds of people congregating around the city, especially in the parks, contrary to his orders for social distancing to combat the spread of the virus. Parks has cancelled or limited access to a number of its facilities and services and the NYPD began enforcing social distancing from the 23, according to various reports. Governor Cuomo noted in his March 25 media briefing that the plan also includes provisions for closing some streets in order to provide more room for people to walk at a safe distance from each other. The City announced the first street closures on March 26.

Media reports on March 26 say the Parks Department will remove the hoops from at least 80 basketball courts where young people have refused to stop playing pick-up games. 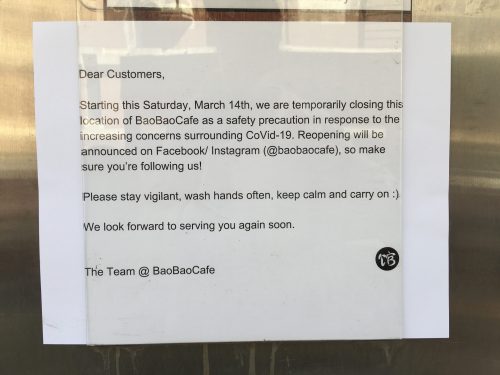 New York State has taken a number of actions in response to Covid-19, including measures to ameliorate the economic impact on businesses and individuals. Some of the major ones include: