New York City’s emergency services swung immediately into action following an apparent natural gas explosion that brought down two buildings on Park Avenue between 116th and 117th Streets on Wednesday, March 12th, at around 9:30 in the morning. According to news reports, seven buildings surrounding the two that collapsed and burned had to be completely evacuated because of blast and smoke damage, displacing dozens of families and individuals. The force of the initial blast blew out windows in the surrounding neighborhood, sending glass and debris into apartments and shops close to the site, which was then compounded by heavy, acrid smoke and dust blowing in through the openings. A number of residents of the two destroyed buildings who survived the blast or who were not at home at the time are also, of course, now homeless.

Utilities in the area were shut off following the explosion, although power and water have largely been restored. Furthermore, window spaces were boarded up until windows can be replaced, and cleanup efforts are underway in the affected buildings. The Department of Buildings first inspected all buildings in the area and deemed them structurally sound.

However, a large number of people continue to either live with friends or relatives or have been taken in to New York City’s shelter system until they can return to their apartments or find new housing. New York City’s Office of Emergency Management, which oversees and coordinates the City’s response, worked with the American Red Cross to set up a temporary shelter facility at the Salvation Army building on 125th Street, nearby, which also included access to services to assist those affected by the disaster. This was shut down after two days when residents were moved into City-provided temporary housing.

Beginning on Saturday morning, March 15th, a Resident Service Center was established in vacated kitchen space at La Marqueta, a couple of blocks down from the blast site. The site provided one-stop access to almost any service the residents might need, including the Social Security Administration and NYC Department of Vital Statistics (for lost documents), Department for the Aging, Department of Homeless Services (handling temporary sheltering), Department of Buildings, the Mayor’s Office of Immigrant Affairs, and others.

Information was provided in English and Spanish, with interpreters on hand for Spanish, French, Japanese, and Chinese speakers. OEM activated Community Emergency Response Teams to deploy members to help with directing and assisting people at the Service Center, and to provide interpreting services for those who needed them. (I was deployed through my CERT unit, Community Board 7 / 11 Queens, to assist and to act as a Japanese language interpreter where necessary.) CERT members along with NYPD officers also escorted residents to their apartments in the buildings surrounding the blast site to retrieve personal possessions and valuables, recognizing that it could be days or weeks before many people are able to return to their homes.

The American Red Cross and other non-governmental organizations also had tables in the Center, with the ARC handling the registration of those affected to get them started on their application processes for whatever services they required. Other volunteers at the Center came from organizations such as Japan America Social Services, Inc., a nonprofit group providing services to Japanese living in New York, the Hunter College Silberman School of Social Work, the Tzu Chi Foundation (a Buddhist relief organization), and the ASPCA (for those people with pets).

In the days immediately following the explosion, the Center allowed the City to reach out to those affected and established an easy and effective way to make sure everyone who needed help was able to get it. The plan originally was for all affected residents of the area to be registered during the first week with the ARC and any departments from which they require services, after which the Resident Service Center would be shut down. However, it was eventually kept open a week longer than planned, until Sunday, March 23rd, to continue providing services.  It certainly made life much easier for the affected households, many of whom have infants or small children, no money, and no way to easily travel to the many different offices with whom they need to speak. On top of this, the Center provided volunteers and officials who could lend a sympathetic ear and provide some measure of comfort to people who have gone through an incredibly traumatic experience.

Residents who still require support services are now being referred to a nonprofit organization, Safe Horizon, which has an office in the area.

The City has also provided each household with $30 worth of MetroCards, to help them as they are now forced to travel between distant shelters and their jobs and children’s schools, and to seek emergency services at the RSC and Safe Horizon.

Working with the Mayor’s Office, the New York State Association for Affordable Housing and the Real Estate Board of New York announced on March 14th that they would provide 34 apartments on the East Side for up to three months for displaced residents. The Mayor’s Fund to Advance New York City has also been raising funds to help those affected.

Some residents may be able to return to their homes fairly quickly, once services are restored, windows are replaced, and the debris cleaned up. Others may have to wait longer, if their homes suffered extensive damage. And the surviving residents of the two destroyed buildings will have to start life over, having walked away with only the clothes on their backs. 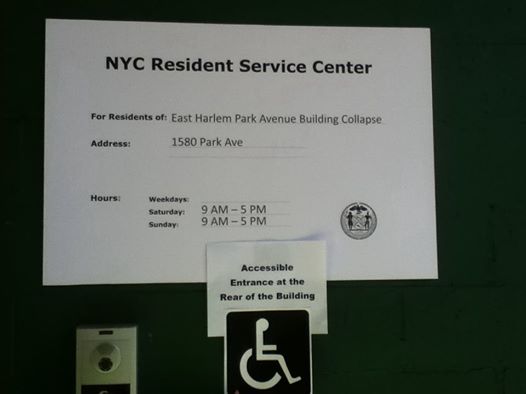