Perhaps those who visited Japan might have seen some of these “city mascots.”

Yes. Believe it or not, these mascots dancing to the tune of Carly Rae Jepsen’s “Call Me Maybe” in the following videos are sponsored by Japanese local governments to promote each jurisdiction, local tourism and local products. They are called “Yuru-Chara”, meaning relaxing mascots. (FYI, the following videos were officially produced by the Japan National Tourism Organization.) 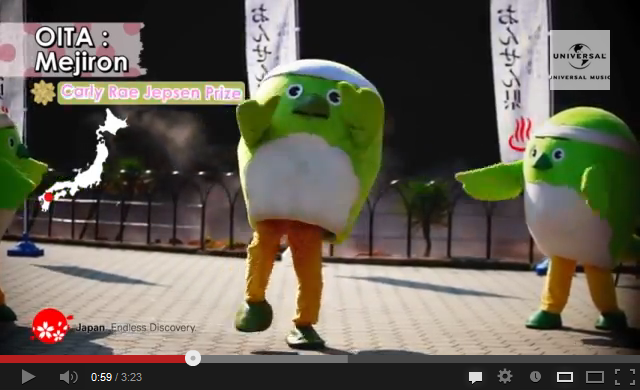 Yuru-Charas are quite popular in Japan. There has been annual Yuru-Chara Grand Prix contest since 2010. In 2012 contest, nearly 900 Yuru-Charas were registered. As you may know, the number of local governments in Japan is approximately 1,800. To see the 2012 contest participated mascots, please select the area of Japan at the following web site: http://www.yurugp.jp/index.php

It was awarded the Grand Prix in 2011 Yuru-Chara contest. But that’s not what is important. Kumamoto Prefecture government, which has the copyright of Kuma-mon, allows eligible business to use this attractive character on their products and advertisements for free. Examples of such products are found at the following website; http://kumamon-official.jp/goods

According to the prefecture government, the sale of these products reached at least 325 million dollars last year. For your note, the sale is made by local business, not by the prefecture. But doubtlessly it leads to the development of local economy as well as tax revenue. This can be called quite a success.

At present, most of these Yuru-Charas are mainly used for domestic promotion. But don’t you think they are so cute? In the near future, perhaps the day might come when these Yuru-Charas are recognized in overseas countries, like Pokémon. Please visit Japan and find cute city mascots before they got too popular.