It’s easy to get used to the conveniences of New York City: Great tap water; abundant restaurants, shops, and bodegas scattered throughout almost every neighborhood; and a pretty good transportation network (most of the time).

But what happens if all of that suddenly shuts down?

Learning from Superstorm Sandy, the City of New York has been reassessing all aspects of its emergency preparedness, both in terms of understanding what the dangers are and how the City can best respond to them. One outcome of this has been the decision to implement a new Commodity Distribution Point program that will help ensure that residents receive basic emergency supplies, hopefully within 24 hours, should a major incident interrupt access to the necessities of life. There were protocols in place for distributing supplies before this. However, many shortcomings in this system became obvious in the course of the unprecedented response mounted after the passage of the storm in late October 2012.

For example, it became clear there were large-scale logistical problems such as keeping track of supplies and making sure they were distributed efficiently to the public, and smaller-scale issues such as the fact that the MREs (Meals Ready to Eat) given out in the days and weeks after Sandy contain too many calories and are not suitable for many people to consume for an extended period. In response to these, plans are now being developed to use GPS to track supplies, distribution sites are being rethought, and new rules prohibit giving people MREs for more than two or three days, after which the City is contracting with food service providers for hot meals to be available.

Similar to Point of Distribution (POD) systems used by the federal and state governments, the Commodity Distribution Point program, or CDP, involves collaboration among the Department of Parks and Recreation (DPR), the Office of Emergency Management (OEM), the Department of Education (DOE), and the NYC Human Resources Administration (HRA), as well as a number of volunteer groups and the Mayor’s Office. CDP has identified 64 primary sites throughout New York City’s 51 community board districts to provide, at the very least, basic life-sustaining supplies –  food, water, ice for preserving medications, and baby formula.

DPR is the lead agency, partly because most sites would probably be located on Parks land, although schools and other education facilities may also be called upon to serve as distribution sites. OEM has responsibility for coordinating emergency responses involving multiple agencies. HRA handles food assistance, cash benefits, and other services to the disadvantaged both normally and in emergency situations. They are also reportedly handling the necessary contractual arrangements for CDP with food suppliers, etc.

OEM has been hosting a series of volunteer training sessions to help prepare the 4,000 people the program is estimated to require to run the 64 sites. As with all New York City response efforts, staffing is anticipated to come from both city employees and volunteers, and the hope is that the ongoing training program will ensure that people staffing the sites are ready to hit the ground running, avoiding the confusion and haphazard nature of many earlier efforts.

The Community Emergency Response Team (CERT) units complement the CDP program because they can provide people trained in various aspects of emergency response who are familiar with how the City responds to emergencies and can contribute their personal knowledge of each local community. This is why OEM has been reaching out to CERT members especially to include them in the CDP training sessions.

The CDP system is scalable, and can be expanded from one distribution point to the full 64, if necessary. Currently, OEM is also working with DPR and other agencies to identify additional sites beyond the ones already chosen in order to provide supplemental capacity or alternate locations should a primary site be unusable for some reason. According to OEM, FEMA calculates that one distribution point should be able to serve up to 20,000 people per day, and they can be configured to handle either pedestrians or vehicles, depending on the type of area in which they are placed.

The CDP system is activated either in anticipation of a foreseeable event likely to disrupt the supply chain or immediately after an event occurs. One basic rule, however, is that CDPs are not set up or run in areas where stores are operating, so as not to undermine the local economy.

Ancillary issues are also being addressed, as well. One is access to gasoline. A major problem with Superstorm Sandy was that even though gas stations had gasoline, they did not have electricity to operate their pumps. In accordance with a new state law requiring certain gas stations to have back-up generators, the City is now implementing a generator quick connect program to supply portable generators to gas stations and other critical locations to ensure they keep functioning. Many buildings are now also required to have connections built in for hooking up emergency power.

Another issue is communications. The Department of Information Technology & Telecommunications (DoITT) has been tasked with preparing an emergency communications network, and private sector telecom providers are stepping up their ability to set up mobile towers should the regular cell network go down.

Emergency planning is an ongoing process, and each implementation reveals shortcomings in whatever the current plan is. New York City, working through an all-hazards approach, is preparing to do even better next time – whatever that “next time” is. 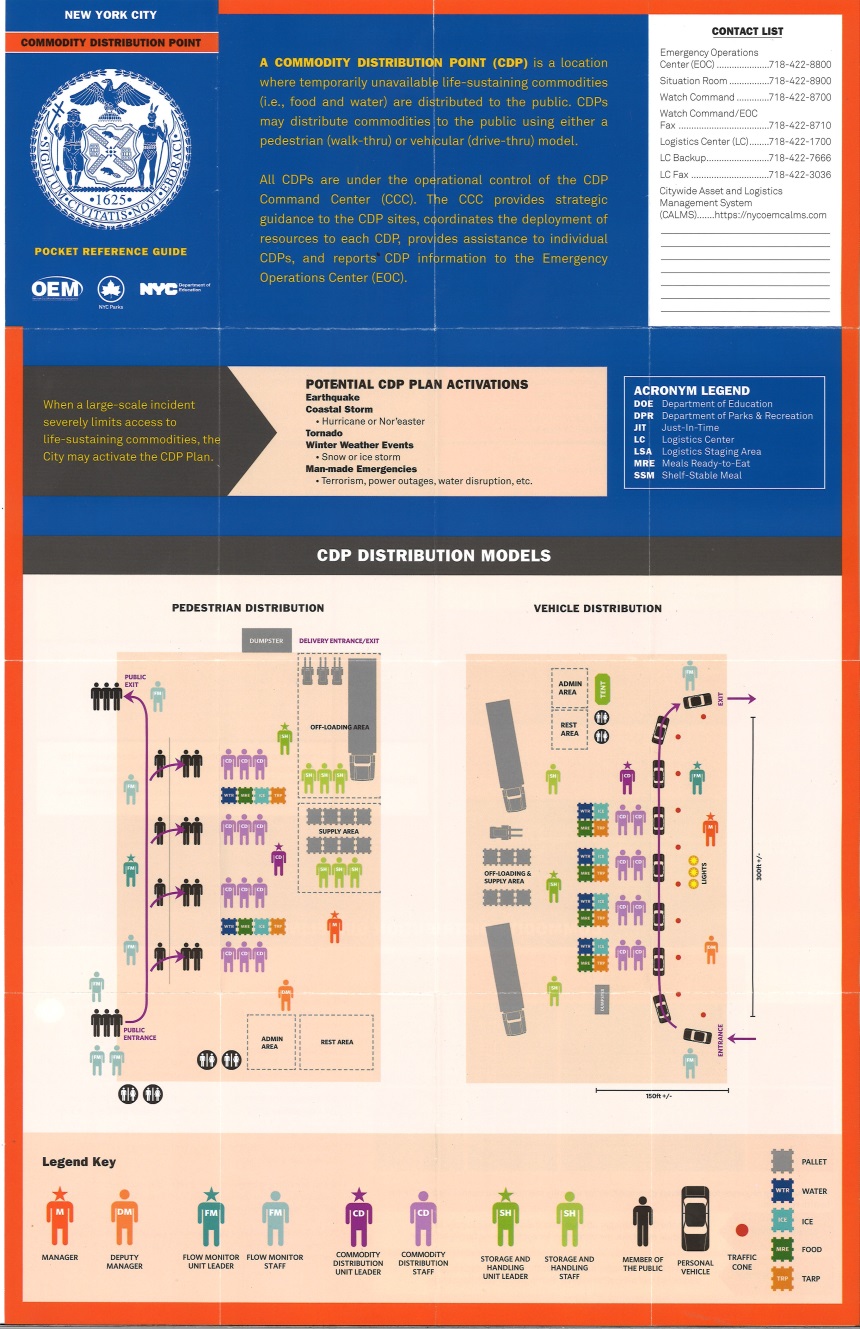